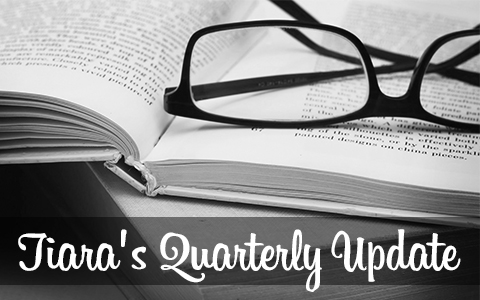 I learned last year that I am too busy (and lazy, probably lazy, as well) for monthly update posts, even when I do want to share what I’ve read/listened to. I can get quarterly update put the way. There’s always a solution to a problem. Four update posts a year shouldn’t be a huge hurdle for me to overcome. The only challenge that will be missing from this list is my audiobooks update since I’ll do a quarterly update with Mogsy and Wendy, but the books are on the list.

There is plenty of overlap here as I expcted there would be since I’m trying to consolidate and not overwhelm myself. Also, I’ve decided to add all books that I read that fit a challenge to that challenge, even if it wasn’t on my original list. I’ve also shuffled my original lists around a bit as I looked through my TBR piles. My psychologist friend dropped me various books to read, as well, so that’s mixed in here with the rest of the books. I finally read my first Gillian Flynn novel, and no, it’s still not Gone Girl. I’m trying to be the last woman standing who hasn’t read that.

I only made a 52 book goal for Goodreads this year, even though I’ll likely read more than that. I’ve decided that I’m probably going to keep that as my goal this year rather than upping it throughout the year as I did last year. 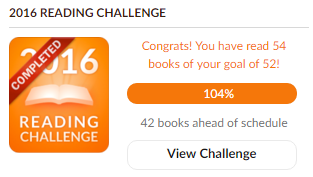 The Year of Sanderson Reading Challenge

I am trying really hard with Sanderson. I made an ambitious goal to read like 7 of his books this year, which isn’t a ton of books given how fast I typically read. However… I’m having a hard time getting into his books. I’ve started two–Warbreaker and Mistborn. Both books have pretty much went on my “on-hiatus” pile. I said I was going to go back to Warbreaker because I’m more interested in that story than Mistborn‘s right now, but I’m afraid this is going to become my first DNF challenge of 2016.

In Order: A Book Based on a Fairy Tale, A Book Translated to English, A Book At Least 100 Years Older than You, A YA Bestseller, A book with a Blue Cover, A NYT Bestseller (surprise Star Wars comic!), A Science Fiction Novel, A Book You Can Finish in One Day, A Murder Mystery, A Graphic Novel, A Book You Haven’t Read Since High School, A Book More Than 600 pages, A Book from Oprah’s Book Club, A Book That Is Published in 2016, A Book That Is Becoming A Movie This Year, An Autobiography

(Unfortunately, I’m going to have to discontinue the Civil War discussion because I have become a bit too busy between work and my kids’ softball/baseball season.)