This book is difficult for me to sum up without feeling as if I’m not doing the story any justice, and there’s not too much more I can say about it that Mogsy hasn’t already covered in her review. The Fifth Season introduces us to a world that is always on the brink of destruction, represented by its “Seasons.” The only thing standing between the people and total destruction are Orogenes, people gifted/cursed with the ability to connect to the earth. You’d think people with such powered would be revered. They’re not. They’re despised, only valued for the help they can give people. Otherwise, they’re hunted down or sent to a school that uses them to thwart catastrophes. This book follows three Orogenes–a child taken from her family, a young woman paired with an experienced Orogene, and a rogue Orogene mourning the loss of her son after he’s killed by his father. And this is the end of the world for the last time.

Admittedly, I wasn’t quite pulled in until I was a few chapters in, but once I fell into the story, I could not stop reading/listening to it. Jemisin has grown tremendously as a writer. Robin Miles was the perfect choice for this story and really pulled many emotions from me with her charged narration. This is not an easy read/listen. It’s gritty, it’s rough, it’s emotional. Violence and casual disregard of others’ well-being are just a fact of life in this story. Jemisin gives agency and identity to people who aren’t often portrayed in literature. Sexuality is presented on a spectrum that goes beyond our heteronormative. This world is both progressive and conservative in its beliefs and presentation. I’m continuously impressed with how Jemisin presents her ideas about the human condition in a fantasy setting with excellent world-building, but this world also felt familiar for all its differences. There were things about it that felt as if one time maybe this place was something like our own world with its use of electricity and running water. It touched me on a profound level, and I haven’t stopped thinking about this story or revisiting its pages much like I did when I read The Hundred Thousand Kingdoms.

Mala Ramchandin arrives at a home for the elderly barely sane and unable to tend to herself. She’s been acquitted of a murder where little evidence exists other than what officers are able to relate of the scene they found at her home when her mind finally broke completely. At the elderly home, she becomes the first patient of a male nurse, Tyler, who is an outcast among his coworkers for being a male nurse and for being gay (though he tries to hide his true nature in vain). Tyler begins to unwrap Mala’s past which is painful and froth with abuse and heartbreak.

This book falls into the realm of magical realism. However, it’s on the lighter side of the genre. This was a beautifully written, painful story that explores strength, the fragility of humans, abuse, gender, identity, determination, and the courage to feel no shame for what you are. Set on a fictional Caribbean island of Paradise, Mala helps Tyler as much as he helps her. Much of this story is a visceral reading experience that beckons readers to read with their heart.

Strong trigger warning on this one as it deals with abuse in some detail. 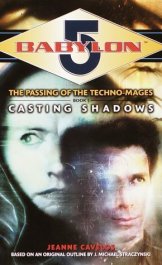 Galen is a young techno-mage on the eve of completing his apprenticeship to become a full techno mage. He is the offspring of two techno-mages who died tragically when he was young. After their deaths, Galen was raised and taught by his parents’ friend and fellow techno-mage, Elric. Years later, Elric is the latest host of the techno-mage gathering, a month long event where techno-mages assemble for a fellowship of sorts and to test their apprentices to see who’s ready for the title of techno-mage. However, at the event, things go awry as threats are revealed outside and within the techno-mages that could threaten their existence. Galen finds himself moving from apprentice to potential threat to becoming an important part of the coming war. This book is set in the Babylon 5 universe, and I was a huge fan of Babylon 5 when it was showing. I can vaguely remember Elric and Galen making appearances on the show, but they weren’t regulars. Despite that, I never watched the spin-off based on the techno-mages (Crusade). In that respect, this felt like a new story revolving around the techno-mages and technomancy. Technomancy is the process of alchemizing science into magic. Each techno-mage has a signature way of casting their spells and it’s different for every mage.

For example, the main character, Galen, breaks spells down mathematically. He has to visualize the equation he associates with spells. Isabelle is a knitter, so her understanding of magic is channeled through that. She “knits” her spells by actually moving her hands as if she’s knitting. As a knitter, I found that really cool. Isabelle is adept at shields, and her shields appear as tightly woven energy when examined on a microscopic level. You have characters who sing their spells, scream their spells, perform certain motions to cast their spells, etc. Depending on the way spells are cast, it makes some forms of magic harder for characters. Galen has a hard time creating spells that protect him, and while he can see what needs to be done while attempting healing spells, he’s unable to produce the desired outcome. He can’t visualize the equations needed for these spells, and he believes they might be too complex or imaginative for his rigid style.

This turned out to be a fun read that was surprisingly not as campy as I’d expect from a tie-in novel from the late-90s/early-00s. Of course, some things are geared toward readers familiar with the series, but I don’t think a reader has to have much intimate knowledge of Babylon 5 or Crusade to enjoy this story.