Thriller Thursday Audio: Something She’s Not Telling Us by Darcey Bell 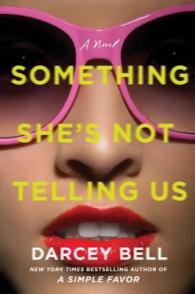 Something She’s Not Telling Us by Darcey Bell

Rarely have I come across a thriller I didn’t enjoy. After all, books in this genre are meant to be gripping or to keep you engaged by their very nature. Still, some are definitely better than others. Case in point, while overall I enjoyed the premise and plot of Something She’s Not Telling Us, the story wasn’t as suspenseful as it could have been and the payoff was a bit lacking.

At the center of this tale is Charlotte, owner of a successful flower shop in trendy Manhattan’s East Village. She and her husband Eli have a five-year-old daughter named Daisy who is doted upon by her parents, even if they can be a little overprotective. Charlotte’s own relationship with her family is complicated, however. Her mother is temperamental and unstable, a dangerous combination when Charlotte and her younger brother Rocco were growing up. Rocco himself has had pretty bad luck in life, never having been able to hold down a steady job. In fact, the only thing worse than his career prospects is his taste in women. In Charlotte’s opinion, all the girlfriends he’s ever brought home to meet his family have been losers, crazies, or worse.

And so, when Rocco tells her that he’s met someone very special and is bringing her over for dinner, Charlotte has reason to be wary. And yet, to her surprise, his new girlfriend Ruth actually turned out to be pretty normal. Sure, she may be overly chipper and likes to talk a lot, but she seems like a genuinely good person and is also nice to Daisy.

As a matter of fact, Ruth might be a little too nice in that regard. She appears strangely fixated with the little girl, something Charlotte has noticed and does not like at all. Still, might it possible that she’s just being a paranoid parent, and maybe even feeling a bit jealous at the way her daughter has taken to Ruth? But then one day, Charlotte’s worst fears are realized when she learns that someone had kidnapped Daisy from school, and there is only one person she suspects.

To cut to the chase, this was not a bad book, but as a thriller it left much to be desired. Mainly, what I missed was the mystery and suspense. Without spoiling too many plot details, all I’ll say is that there’s not much fun in it when all the answers are given in the first half of the book. The structure of the story was also very messy, bouncing back and forth between past and present without revealing anything significant that readers haven’t already guessed from the first handful of chapters. As such, there was no real twist because you already knew everything there was to know about the culprit, which was that they had serious mental issues, a non-motive that is neither surprising or new for this genre.

I also did not care for any of the characters, and not because they weren’t likable, as that was most certainly by design, but rather because I simply felt they weren’t very well written. Charlotte’s personality was all over the place, and Daisy was a little brat because her parents both spoiled her and also tried to raise her in a protective bubble. Ruth at least had a reason for the fact she was unreliable character, but that got to be too much to the point I just started dismissing everything she did or said.

Suffice to say, there was not much subtlety to this novel; everything from its plot to the writing was exaggerated and over-the-top. Sometimes that can work for a thriller, but with this one, the execution just wasn’t there. As well, it probably didn’t help that I had just finished a couple of excellent thrillers involving kidnappers and missing children, so it was hard not to compare and see how this book fell short.

In sum, Something She’s Not Telling Us wasn’t terrible, but while it may satisfy all the conditions of a thriller-suspense novel, it’s clear many of its genre elements could have been handled better. It gets an average rating from me for that reason, for being highly readable but not too satisfying.

Audiobook Comments: I always love it when an audiobook gets multiple narrators, especially when each POV gets their own reader. This was the case with the audio edition of Something She’s Not Telling Us, and the positive effect was clearly evident, especially since they got such great voice actors. The narrators who performed Charlotte’s and Ruth’s chapters were particularly great, which made for a immersive listening experience.

21 Comments on “Thriller Thursday Audio: Something She’s Not Telling Us by Darcey Bell”