Audiobook Review: Watchdog by Will McIntosh 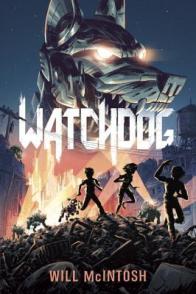 Watchdog by Will McIntosh

I’m a big fan of Will McIntosh and I’ve had Watchdog on my radar for quite some time, though it wasn’t until the release of the audiobook version this month that I finally got to check it out. This being a middle grade novel, it was a quick listen, and the fact that it was also packed with tons of kid-friendly action and a featured an adorable robotic watchdog certainly didn’t hurt.

Vick and Tara are our story’s protagonists, thirteen-year-old twins who were left to fend for themselves in a harsh and unforgiving world after their mom died. Tara is also autistic, and her brother is the only one who understands her struggle with emotions and knows how to help. The two of them live out of a makeshift shelter on the streets, barely surviving off what little they can make from salvaging at the local junkyard. Tara likes to build things and has a talent for figuring out how robots work, so she helps Vick figure out which useful tech parts they can sell. The pair of them are also always accompanied by their small robotic dog, Daisy, which Tara had cobbled together from the odds and ends left over from their trips to the scrapyard.

Then one day, during one of their salvaging sessions, Tara discovers a mysterious component which appears to have been discarded by mistake. Once installed into Daisy, it enabled her to do incredible things that shouldn’t be possible. Unfortunately, this soon draws the attention local crime boss Ms. Alba, who now wants Daisy for herself, sending her goons after Vick and Tara after they refuse to deal with her. Thankfully though, the siblings are very resourceful, and Daisy is far from helpless with Tara’s new upgrades, allowing the little robotic pet to rival the strength and ferocity of Ms. Alba’s own expensive, weapons-grade watchdogs.

Whenever I read Middle Grade, I always have to keep in mind a few things. First of all, the writing and the stories are geared towards children, so you can’t have themes that are too dark or violent, and second, you also can’t load the book up with exposition and too much description or else you end up boring your audience. So that’s sort of where we are with Watchdog, which is understandably less complex than McIntosh’s other work, with world-building and characters that aren’t quite as developed. Still, there’s one more thing that I try to do when I read MG, and that’s putting myself in a kid’s shoes. In this case, I ask myself would a ten-year-old be completely enthralled and entertained while reading this novel? The answer, I think, is yes.

For one thing, readers interested in technology and robotics will find the concept of watchdogs entirely fascinating. The term is really just a catch-all for any kind of robot companion, because in reality watchdogs can be any shape and size, though many owners prefer to model them after animals. They’re also fully customizable, with some folks willing to pay big bucks to fit their robotic pets with high-tech modifications which would allow them to better serve their functions, turning them into effective killing machines. Still, if there’s one thing that a watchdog can’t do, it’s to think for themselves—and that little tidbit is what leads to the crux of the novel.

I also mentioned earlier that the book’s age category keeps it from getting too dark, but at the same time, it’s not all sunshine and lollipops either. Vick and Tara have it pretty rough, orphaned and living alone on the streets of a dystopian Chicago. Their part of town is run by the mob, and at one point they even escape a sweat shop-like factory, narrowly avoiding being sold into indentured servitude. Tara’s character also has autism, and Vick is under the intense pressure to keep them both safe. There are times when his frustration with his sister makes itself known, but there’s also no doubt the two siblings are fiercely loyal to each other. McIntosh portrays Tara’s disability in a compassionate way, acknowledging that it causes her a lot of difficulty, but at the same time, autism doesn’t define her. The message of this novel is simply the importance of family, and at the core of it is a story about a brother and sister who love and protect each other.

All told, I think Watchdog would be great for all readers, though its intended audience—ages 10 to 12 or so—would probably get the most out of it. It’s an adorable story with a solid mix of adventure and sci-fi dystopian goodness, not to mention plenty of action, humor, and heart.

Audiobook Comments: I enjoyed the narration by James Fouhey, who read Watchdog in expressive and animated tones that were perfect for the audiobook. It was an enjoyable listen.

20 Comments on “Audiobook Review: Watchdog by Will McIntosh”