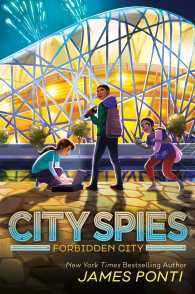 City Spies: Forbidden City by James Ponti was a book I read with my 10-year-old daughter, a voracious reader like her mom, and my library as well as my horizons have definitely been broadened now that she’s at an age to read Middle Grade fiction. Of course, she being the target audience for this series, it was also enlightening for me to get her perspective and opinion while writing this review.

As the third installment in the City Spies sequence, Forbidden City continues the adventures of a secret MI6 team made up of a group of teenage spies led by the agent known as “Mother.” Although I haven’t read the first two books, this did not pose an issue since the story was structured in such a way that even complete newcomers to the series can jump right in and not feel lost.

Unsurprisingly, the kids are the central focus of the novel, and they include Paris, Kat, Sydney, Rio, and Brooklyn (they’re all codenamed after the cities from which they’re recruited, which I thought was a nice touch). As the story opens, the City Spies are on a mission to infiltrate the mansion of billionaire music producer Sir Reg, using his daughter Tabitha’s birthday bash as the perfect cover. While sneaking through Sir Reg’s office though, Paris comes across some files which indicates the music mogul may be part of an evil organization called Umbra. The intel also suggests that Umbra may be planning to kidnap Park Jin-Sun, North Korea’s top nuclear scientist, no doubt to further their own nefarious agenda. Determined not to let that happen, MI6 decides to get Jin-Sun to defect to the British—but that can only if they get to him first.

Luckily, the scientist’s young son Dae-Jung is one of the world’s most talented chess players who is scheduled to appear at several international tournaments, giving MI6 a chance to get close. A plan is thus hatched to get Paris (a pretty good chess player himself) into the tournaments as well, so that Mother can work his magic on Jin-Sun. In the meantime, the other City Spies are working on their own projects, like trying to break the code Sir Reg and his agents are using to communicate with each other. Sydney is also going undercover as a social media manager for Tabitha as she travels around the globe with her father’s biggest client and the world’s hottest boy band, trying to figure out what Umbra may want with a nuclear scientist.

As with most MG, the plot of Forbidden City was easy to follow, but also quite predictable and admittedly a little silly and unrealistic. Still, it was a blast for both myself and my daughter, and as I always say, the best stories are those that can be enjoyed by everyone, no matter how old you are. As you’ve probably guessed, our favorite part of the book was hands down the globetrotting and reading about the City Spies traveling to all these incredible places, with the espionage angle making the entire premise even more exciting. Speaking as a parent, I also appreciated the opportunities this presented for learning more about the history and culture of different countries.

The relationships in this book were also very endearing. The Spies are made up of a diverse group of children, and they are more than just friends—they’re family! Mother is the leader of the group, and he’s one heck of a special agent, though he has a softer side as well. Nowhere is this more apparent than when he is trying to be the best father figure he can be to his adopted children, especially Paris, who gets to be in the main spotlight in Forbidden City. It’s also worth noting that while I have not had the pleasure of reading the previous books, I still felt as though I know these characters on a deeper level. Even the adults get their moments to shine, and in this one, Mother reveals the touching backstory for his codename, which made me warm up to him even more.

But the biggest indicator that Forbidden City was a hit? Right after she finished the book, my daughter expressed interest in checking out the first two volumes, and I’m right there with her—although I was able to follow this one with no issues, I feel like there’s a lot of history I’ve missed based on some of the references to previous events and past characters showing up, and I’d like to know more. Ultimately, this book was just plain fun, and if you’re someone who is open to exploring MG fiction, I highly recommend trying City Spies, especially if you’re intrigued by the author’s approach to a spy adventure.