This is a post I drafted earlier in the week before my road trip, so by the time it goes live and you’re reading this, I’ll be in the middle of my holiday to visit family for Thanksgiving! Speaking of which, if you also celebrated this Thursday, I hope you had a great time! Anyway, that’s why the blog has been light on reviews this week, and also I haven’t been as on the ball with visiting everyone’s blog because I’ve been busy with travel and family things. But I promise I’ll be catching up again real soon when I get back!

My thanks to Orbit for sending finished copies to a couple of exciting December releases. I still need to catch up with the second book in the Masters & Mages series before I will be able to read Bright Steel by Miles Cameron, but I am all caught up with the Spellslinger series and I’m looking forward to diving into Crownbreaker by Sebastien de Castell. This is the final book and I can’t wait to see how it all ends.

With thanks also to 47North and the kind folks at Wunderkind PR for The Will and the Wilds by Charlie N. Holmberg. I didn’t know the author had another book coming out and I’m pretty curious to check it out.

Thank you also to Tor Teen for Storm from the East by Joanna Hathaway, the sequel to Dark of the West. Guess I’ll have to find some time to knock the first book off my TBR! And from Tor I also received a finished hardcover of Sabbath by Nick Mamatas, which I hope to get to in early December.

And courtesy of Saga Press, I received a surprise ARC of Gravity of a Distant Sun by R.E. Stearns. Looks like this is the third book in the Shieldrunner Pirates series, which shocked me because I didn’t even know a second book had already come out! I have a copy of Barbary Station somewhere though, which I really need to get to.

Thank you also to Del Rey for sending me the following ARCs: A Blight of Blackwings by Kevin Hearne is the sequel to A Plague of Giants, which I confess didn’t really blow me away. I’m still on the fence when it comes to continuing the series, but I’m glad to have the second book on hand in any case! The Last Human by Zack Jordan on the other hand is a book I’m really looking forward to reading; you might recall earlier this fall I had featured it for Waiting on Wednesday, so I couldn’t have been more thrilled when it showed up.

From the awesome folks at Harper, I also received a finished hardcover of The Andromeda Evolution by Daniel H. Wilson and Michael Crichton. In case you missed it, I reviewed the book earlier this month, so be sure to check it out in the roundup links below.

My thanks also to HarperTeen and Wunderkind PR for The Caged Queen by Kristen Ciccarelli. I was actually sent a pitch for the third book of this series, but when I wrote to let them know I hadn’t read the second one, they kindly sent it to help me catch up, which was a nice surprise!

And speaking of surprises, earlier in the month I received this new-to-me YA thriller called Every Stolen Breath by Kimberly Gabriel. It’s also from an imprint I hadn’t heard of before; my thanks to Blink for sending this one along!

Finally, my thanks to Titan Books for sending me another incredible collection and the second volume in the anthology series, Infinite Stars: Dark Frontiers edited by Bryan Thomas Schmidt. With an author list that includes names like David Weber, Orson Scott Card, Arthur C. Clarke, Robert A. Heinlein, George R.R. Martin, C.J. Cherryh, Seanan McGuire, Becky Chambers and more, this is one sci-fi fans won’t want to miss. 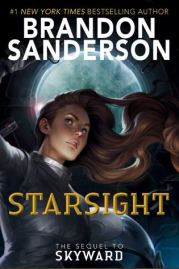 Only one audiobook in the digital haul for review this week, but it’s a big deal! I’ve been looking forward to reading this sequel to Skyward for so long! Very glad that it’s finally here, with thanks to Audible Studios for a listening copy of Starsight by Brandon Sanderson.