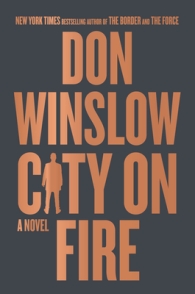 City on Fire by Don Winslow

A beautiful woman who comes between two rival empires and ignites a brutal, bloody war. Sound familiar? City on Fire is crime thriller novelist Don Winslow’s modern take on the classic tale of Helen of Troy from the Illiad, using the gangs of 1980s New England as a backdrop.

In Providence, Rhode Island, the Italian and Irish crime syndicates co-existed in relative peace, until one summer, an incident at an annual beach gathering between friends gives way to bitter conflict.  Pam, the girlfriend of Paulie Morretti, accuses Liam Murphy of groping her inappropriately. Morretti’s crew, not about to let this disrespect slide, decide to teach Liam a lesson by breaking his head and putting him in the hospital. Of course, things would have ended there had Pam not gone to visit Liam during his convalescence. Before long, they were together, and the insult becomes too much for Paulie to bear, thus setting off the war between their two gangs.

In the middle of this is Danny Ryan, our protagonist. His father used to be the head of the Irish mob, before alcoholism got to him and the Murphy family took over. Now Danny is the husband of Terri Murphy, the beloved daughter of his new boss. He’s also best friends with Pat Murphy, his brother-in-law, putting Danny in a unique spot despite not being a main player. As the youngest Murphy boy, Liam is used to being doted upon, but now his antics will require Danny taking on a bigger role in the family business, as the war with the Morretti rages on. At first, having more responsibility was what Danny thought he wanted, but now he’s not so sure. With a baby on the way, and the violence getting increasingly bloody with the body count on both sides rising, it’s all Danny can do to survive and keep his loved ones safe.

To tell the truth, I know next to nothing about mob fiction. So, take it with a grain of salt when I say that, at least to me, City on Fire felt very much like your stereotypical gangster story complete with the standard tropes. We’re talking lots of violence, gunplay, double crosses, and a host of other brutal activities related to the underworld of organized crime. The characters are pretty archetypal too, from the chest-beating crime lord and the hard stubborn men who surround him, to the femmes fatales who only seem to wield their beauty and sexuality in order to further their own gains. There’s even the “weak link” younger brother who causes all the problems. Keep in mind that this book also takes place in the 80s, and coupled with the mob culture, expect a lot of both casual and blatant racism, sexism, homophobia, etc. which comes with the territory when it comes to the genre.

The main premise behind the novel was certainly interesting though, as was its execution. The inspiration of the Iliad was subtle but undoubtedly there, with allusions to the classic poem cleverly inserted at varying points of the story. Historically, I didn’t even know New England gangs were a thing, but apparently Rhode Island in particular was a hotbed for mafia activity. This being my first time reading Winslow, I was also unused to his writing style, which was very matter-of-fact and not particularly refined. That said, the tone was a perfect match for this type of story. As with any epic saga, everyone who plays a role—no matter how big or how small—also has a backstory. While the timing of these weren’t the best, as they tended to disrupt the flow, I still loved getting to know the characters and having a better idea of what makes them click. And with so many characters to keep track of, having a solid background established for each person really helped.

The overall story was also breath-takingly good and utterly compulsive. Despite a lack of any major surprises (like I said, it’s very tropey), I was nevertheless completely hooked. Even with the frequent detours to explore yet another character backstory, the momentum of the plot never ceased driving forward. City on Fire was seriously hard to put down.

All in all, despite this being something an “outside the box” read for me, I still enjoyed myself immensely, even with some minor speedbumps along the way. Plus, speaking as someone who only has a casual knowledge of this genre, I also loved how perfectly accessible this was, especially once I got the hang of all the characters. My first Don Winslow book and I’m definitely not disappointed.

7 Comments on “Review: City on Fire by Don Winslow”