Protect The Prince by Jennifer Estep (July 2nd, 2019 by HarperVoyager)

I discovered quite a few favorite new-to-me authors in 2018 (there will be a top ten list coming very soon), and one of them was Jennifer Estep. I was surprised by how much I enjoyed Kill The Queen, which was a highly enjoyable read despite the story’s heavy reliance on well-worn fantasy tropes. It was the perfect book to kick back and relax with, and I’m looking for more of that light entertaining good fun with the sequel. 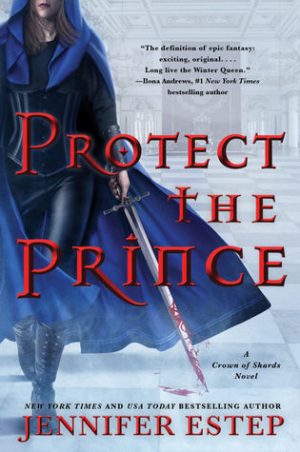 Everleigh Blair might be the new gladiator queen of Bellona, but her problems are far from over.

First, Evie has to deal with a court full of arrogant, demanding nobles, all of whom want to get their greedy hands on her crown. As if that wasn’t bad enough, an assassin tries to kill Evie in her own throne room.

Despite the dangers, Evie goes ahead with a scheduled trip to the neighboring kingdom of Andvari in order to secure a desperately needed alliance. But complicating matters is the stubborn Andvarian king, who wants to punish Evie for the deaths of his countrymen during the Seven Spire massacre.

But dark forces are at work inside the Andvarian palace, and Evie soon realizes that no one is safe. Worse, Evie’s immunity to magic starts acting in strange, unexpected ways, which makes her wonder whether she is truly strong enough to be a Winter Queen.

But Evie’s magic, life, and crown aren’t the only things in danger—so is her heart, thanks to Lucas Sullivan, the Andvarian king’s bastard son and Evie’s . . . well, Evie isn’t quite sure what Sullivan is to her.

← 2019 Audiobook Challenge
Book Review: The Winter of the Witch by Katherine Arden →