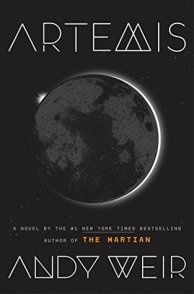 A hit like The Martian is hard to follow up, but it seems Andy Weir has no trouble keeping the good ideas coming, producing another yet novel with realistic hard science and entertaining adventure. Still, while comparisons will no doubt be drawn between his debut and his new novel Artemis, it’s important to note that the two stories are very different, not to mention his new protagonist is a heroine cut from an altogether different cloth than Mark Watney.

Meet Jasmine “Jazz” Bashara, a twenty-six-year-old who has spent most of her life living in Artemis, the only city on the Moon. It’s a nice place to live if you’re wealthy enough to afford all the amenities, but as Jazz puts it, you can’t expect J. Worthalot Richbastard III to scrub his own toilets. Of the two thousand or so residents in the city, a bulk of them are the support staff and people who keep the place running, and Jazz is one of them. A genius who could have been anything she wanted, she instead chose to become a porter, a job that barely covers the rent, though she does occasionally supplement her salary with small smuggling operation on the side, sneaking in harmless bits of contraband.

Then one day, one of her richest and most trusted clients offers her a lucrative business proposal. The job, however, requires Jazz to pull off a crime that goes far beyond the limits of petty smuggling—one that, if she gets caught, can get her kicked out of Artemis and deported back to Earth. Having been on the Moon since she was six, Jazz can’t imagine a life anywhere else, but with this much money on the line, she can’t afford to say no either.

Like The Martian to some degree, I think whether you enjoy this book or not will largely depend on how you feel about the protagonist. While she may be exceptionally intelligent, Jazz lacks the aspiration and drive of a traditional hero, preferring to stay under the radar instead of applying her smarts to achieve something greater. However, that’s not to say she shies away from a challenge, for as unambitious as she is, Jazz also has a rebellious streak and seems take secret pleasure in using her intelligence to break the rules. Coupled with her sense of humor that tends to skew towards the juvenile, this admittedly makes her character feel much younger than her twenty-six years. I think Weir probably tried for “bold, cheeky young woman” but only managed “childish teenage girl” instead, ultimately giving Jazz a narrative voice that you’ll either get used to or you won’t.

Now with that warning out of the way, let’s get on to the good stuff. Weir has apparently created something that many readers—and not just science fiction fans—seem to be missing in their lives: a speculative genre that blends thrilling adventure and fun with realistic and believable science. Once again, he appears to have gone to great lengths to get everything as scientifically accurate as possible, beginning with a bit of insight into the day-to-day life of an average citizen on the Moon. Weir allows Artemis to unfold before us, presenting it in a creative and reader-friendly way through Jazz’s eyes as she spends the first few chapters 1) failing her EVA Guild exam, 2) traversing the city while carrying out her duties as a porter/smuggler, and 3) pitching in to help rescue workers at a factory fire. In one fell swoop, the story has not only introduced our protagonist but also managed to convey all the wonders and dangers of lunar life. Artemis is a place of dichotomies. It’s a vibrant ultra-modern city in the middle of a desolate landscape. The rich and the glamorous exist beside the poor and drab. And while authorities may take a lenient stance on some matters related to the law, on matters of safety they are unbending and resolute. Everyone takes the rules seriously when it comes to maintaining the integrity of the city’s framework or life support systems, because it could mean the difference between life and death.

Once the setting is established, that’s when the real fun begins. The story picks up considerably as soon as Jazz agrees to take on her wealthy client’s job. Her immature personality notwithstanding, Jazz is a force to be reckoned with when she sets her full mind to a task, and her problem solving process is an incredible thing to see. But of course, nothing ever goes as planned. Gradually, the excitement builds as Jazz unwittingly stumbles into a web of conspiracy and backroom dealings, putting herself and the people she cares about in danger. The action crescendos and doesn’t stop until we reach a boiling point in the climax, giving rise to some of the most intense chapters I’ve ever read, with the added bonus of making you want to fistpump the air yelling, “GO SCIENCE!”

All in all, I had a great time with Artemis, a story which was as fascinating and enjoyable as I expected from a brilliant mind like Andy Weir’s. The true test, really, is Jazz and how you’ll react to her personality and narrative voice. She’s one of those characters who would either endear herself to you or give you a raging headache, and where you fall in this spectrum will no doubt affect your experience with the book. If Jazz can win you over though, like she did with me, then I have no doubt you’re going to love this highly entertaining caper set on the moon.