Are you ready for some punk rock? I hope so, because The BiblioSanctum’s very special guest today is none other than Robert Brockway, author of the Vicious Circuit series! In case you missed it, last month I reviewed the first book, The Unnoticeables. The sequel, The Empty Ones, is out everywhere in stores today! I’m actually in the middle of reading it right now and enjoying the hell out of it.

As we’ll soon see, punk is more than just a music genre. And just how does it fit together with the all the strange and wonderful and terrifying things in the wild world of the Vicious Circuit? Be sure to read on and find out…

If an author has to tell you what their book is really about, then they have failed.

But first, let’s see if you can guess: The Unnoticeables came out last year, and it’s the first installment in a trilogy called the Vicious Circuit. A large part of it is set in New York City, 1977. The Empty Ones is the second book, just out this week, and a large part of it takes place in London, 1978. The third and final book is tentatively called Kill All Angels, comes out next summer, and much of the action is centered in Los Angeles in the early ‘80s.

Got it? If you’re a fan of cheap beer and cheaper leather, stupid haircuts and three chords – no more, no less – then those dates and locations probably tipped you off. The Vicious Circuit is a fantasy series about punk rock. 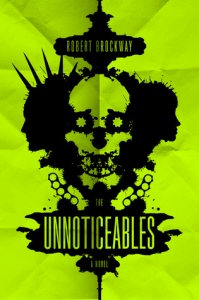 Now, it’s also about monsters and angels and metaphysics and alternate dimensions and immortal psychopaths and faceless children and finding your place as a young person in this world and/or something eating the face of a young person in this world. It’s about a lot of things. I honestly don’t know what genre it is. They told me ‘urban fantasy,’ and then they told me to never say that to anybody else. They told me ‘horror,’ then added ‘but not really.” They told me ‘science fiction’… while reluctantly pointing out that there’s no science in it. The last I heard, my strange, quick-hitting, sometimes funny, sometimes navel-gazing, sometimes action-oriented, sometimes horrific little trilogy of books was best described as “speculative fiction.”

I don’t know the right buzzwords to tell you what my books are about in a bookseller way, so I just say “they’re about punk rock.”

At one point, possibly while high, it occurred to me that the lifespan of punk rock in pop culture shares a very basic character arc with a lot of punks in reality. The conventional wisdom is that punk was born, screaming and filthy, in New York City in the late ‘70s. It burned fast for a few years, hopped the Atlantic—where a new wave of bands used punk to take on more serious political and societal issues—before it finally made the always-a-mistake move to LA, back in the late ‘80s, where it grew jaded and dismal, overdosed, and died.

Hey, don’t jump down my throat: I know the frayed patch on your denim vest is right, and punk’s not dead – it’s alive and well, hiding in small towns and back alley dive bars that don’t serve name brand liquor. But if we assume that story is true – punk is born brash, careless and violent, it quickly comes to realize the world is screwed and tries to change things, then grows disillusioned, angry, and dies too soon – that’s a character arc. A short and fairly rough one, but then, those are two adjectives punk loves.

A lot of young punks share a similar arc in their relationship with the scene: They throw themselves in headfirst and heedless, just fun and games to start, then they begin worrying about the bigger picture, eventually get frustrated with the impotence of their anger, and drift away from punk altogether.

That’s the character arc of punk rock, in both broad cultural terms and personal relationships. So that’s what the overall arc of these books is meant to be: The first book is loud, silly, and violent. The second book starts appreciating just how serious things are getting, and the third is rife with anger and despondence – well, it starts out like that, anyway. I’ll refrain from spoiling my own unreleased finale.

Why am I telling you all of this, when I started off by pointing out that authors who need to explain their message have probably missed their mark?

Because it’s not just former punks reading these books: You don’t need that background to understand or enjoy them. These are urban fantasy stories – they’re horror, they’re philosophically bent science fiction, they’re sitting in a coffee shop, wearing a turtleneck and speculating about fiction. The non-punks might not get the significance of the setting and timeline – and that’s fine, they don’t have to – but if they do understand, it adds a whole other level.

But mostly it’s because I’m trying to get you to buy the damn things.  Let’s be real.

ROBERT BROCKWAY is the author of The Unnoticeables and The Empty Ones (books 1 and 2 of the Vicious Circuit) and is a Senior Editor and columnist for Cracked.com. He lives in Portland, Oregon, with his wife Meagan and their two dogs, Detectives Martin Riggs and Roger Murtaugh. He has been known, on occasion, to have a beard. Visit him online at robertbrockway.net.