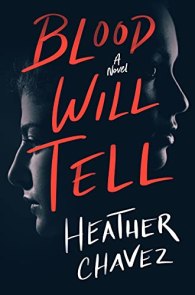 Blood Will Tell by Heather Chavez

Blood Will Tell was a book that snuck up on me, but after her debut thriller No Bad Deed blew my socks off last year, it didn’t take much convincing for me to pick up another book by Heather Chavez!

In this one, we follow Frankie Barrera, a teacher and single mom. There are two people she loves most in the world—her 4-year-old son Julian, as well as her younger sister Izzy. The latter though, who is in her twenties, is understandably unappreciative of Frankie’s attentions, believing her older sister to be overprotective and unnecessarily restrictive. But Frankie has her reasons to be concerned, as trouble always seems to follow Izzy. Five years ago, she went out partying with five of her friends, and at the end of the night, Frankie had to come rescue her from a scene of a car accident. Drunk and confused, Izzy couldn’t remember much, but one of the party goers, her good friend Rachel, disappeared that night and was never seen again.

Now as the story begins in the current time, Frankie is inadvertently caught up in a missing person investigation when the police pulls her truck over for matching. the model and make of the vehicle described in an Amber Alert. Even as she is explaining the misunderstanding, a worried Frankie wonders if her younger sister might have something to do with the abduction, which involves a teenage girl, not to mention the fact Izzy is also the only other person with access to her truck.

After the insanity that was No Bad Deed, this one seemed almost tame in comparison! Not that that’s a bad thing. Just different. Family drama plays a prominent part in Blood Will Tell, and the story has less thrills but more mystery. Over the years, Frankie and Izzy’s parents have had a lot of financial problems and health issues, leaving their girls to fend for themselves. This means Frankie has had to take care of Izzy, who hasn’t made raising her easy, with her wild partying and drug abuse.

But if the family angle was compelling, what of the mystery? This was where the book faltered for me. With two missing persons stories running concurrently, one in the past and one in the future, you would think there was plenty of content to keep the interest high, but I don’t think either really broke the mold and offered anything too different and special. The pool of suspects was small to beginwith, and so the mystery itself also remained limited in scope.

That said, the story was interesting to follow, and the author kept a good hold on all the different threads so the plot was fast-paced and tight. Things didn’t get quite so over-the-top as with No Bad Deed but it did make Blood Will Tell feel more down-to-earth and believable. The relationship between Frankie and Izzy was touching, and realistically complex. The ending was the chef’s kiss on a wonderful narrative between two sisters who might not always get along, but the lengths Frankie goes to protect Izzy should tell you all you need to know. I think anyone with an appreciation for sibling stories will enjoy this one, especially with an added dose of intrigue and light thrills.

5 Comments on “Thriller Thursday: Blood Will Tell by Heather Chavez”