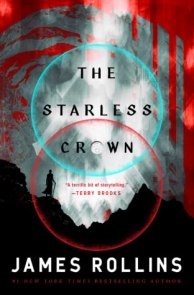 The Starless Crown by James Rollins

Up until now, my experience with James Rollins has primarily been limited to his mystery and thriller books, so epic fantasy seemed like a major departure. But in fact, the author began his writing career with fantasy, as he reminds readers in the foreword of The Starless Crown, so this was more like a return to his roots! Regardless, I was very excited to get to reading.

In this opening volume of the Moon Fall saga, we are whisked away to the world of Urth, a tidal locked planet with one hemisphere always in the scorching sun and the other forever shadowed in frosty darkness. But it didn’t always used to be this way. Our story follows a handful of key POV characters, starting with Nyx, a student at the Cloistery who was found as an infant in the wilderness. Left visually impaired, she can nonetheless glean glimpses into the future through the sporadic visions and dreams that come to her. Then one day, her gift reveals a portent of the apocalypse. Instead of heeding the warning, however, the king decides the bearer of such a dangerous prophecy must be put to death.

Along with a loyal school companion, Nyx goes on the run, and the two are soon joined by allies who believe in her visions and who also wish to help. One of them is Prince Kanthe ry Massif, the second born son of King Toranth who has been swept aside his whole life in favor of his brighter, bolder, and more promising older twin brother. Kanthe had been given a mission which he’d initially thought was a convenient excuse to get him out of the city, but soon discovers it to be a larger plot to assassinate him and get him out of the picture for good. Then there’s Rhaif, a thief who escapes the mines in which he’d been imprisoned only to stumble upon the find of a lifetime. And finally, there’s Graylin sy Moor, a former knight now living in exile for breaking his oaths to his king. He’s sworn never to return home or to wield his sword again, but when he receives word that the child of his slain lover might be still alive, he may be forced to break his vows once more.

This story had the feel of an old-school fantasy, and indeed, once the set up and introductions were out of the way, the plot almost takes on the form of a classic quest narrative, which sees our group traveling through exotic environments peppered with deadly creatures and other lethal threats. And once you get to Rhaif’s find (which I’m purposely keeping vague as not to spoil the surprise), things get even more interesting! When it comes to his magic systems and world-building ideas, it’s clear Rollins is having fun throwing himself right back into the game.

At the same time, there’s no doubt his focus is on the characters and in the now. I mean, his protagonists sometimes do feel a bit clichéd, but the writing certain makes up for it. The best way to describe the prose is that it’s very immediate, possibly a habit developed from Rollins’ mystery and thriller writing. It’s simplistic, not given to complex devices or anything too fancy, and when the author wants you to know something—like, background history or a character side-story, for example—he’ll insert it right into the moment, even at the risk of sounding too info-dumpy. This also gives the narrative a more “telling” vs. “showing” vibe, which can be quite jarring if you’re more used to more traditional epic fantasy conventions, because Rollins is definitely not subtle. On a similar note, he’s also pretty matter of fact when it comes to descriptions, and especially blunt when it comes to scenes of gore and graphic violence, another characteristic of his writing that reminds me very much of his work in the thriller genre.

Still, at the end of the day, I was very impressed with the way this plot kept moving along, because whether you love or hate Rollins’ style, no one can deny it makes for quick, compulsive reading. The pacing was relentless with no lulls to speak of, which made this doorstopper of a novel fly right by. I must have finished it in a couple of sittings, and I can’t remember the last time I finished an epic fantasy that quickly, if ever. Mark my words, if the sequels will contain half the energy that this one has, the Moon Fall saga is going to be awesome.

Overall, The Starless Crown wasn’t without its imperfections, but depending on your personal preferences or previous experience with Rollins’ work, his style might actually work to your advantage. I know I had a rollicking good time, and despite running into some of the usual tropes, I’m interesting and invested enough in the story and characters to find out more.

10 Comments on “Book Review: The Starless Crown by James Rollins”