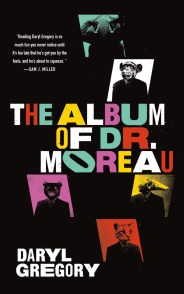 The Album of Dr. Moreau by Daryl Gregory

Mr. Gregory, please do not ever apologize for writing ridiculous mashups! In fact, I sincerely hope you will decide to write more of them. I have been a fan of the author for a long time, and knowing that The Album of Dr. Moreau is the latest from the same creative mind who brought us such unforgettable quirky reads like Spoonbenders, Harrison Squared, and We Are All Completely Fine, I just knew this one was going to offer some unexpected twists!

In this story, readers have the pleasure of meeting the WyldBoyZ, a hit pop music boyhand made up of genetically engineered human-animal hybrid singers Bobby the ocelot (“the cute one”), Matt the bat (“the funny one”), Tim the pangolin (“the shy one”), Devin the bonobo (“the romantic one”), and Tusk the elephant (“the smart one”).  They have just wrapped up the last night of their musical tour which happens to be in Las Vegas, and true to form, the “boyz” have decided to celebrate by throwing a party that’s out of this world.

The next morning, however, housekeeping knocks on the door to Bobby’s room and enters to find the ocelot groggy and confused, his fur drenched in blood. Next to him in the bed are the remains of the band’s manager Dr. M torn to shreds. Before long, the police are on scene, led by LVPD Detective Luce Delgado who wishes she hadn’t been assigned to the case. Her own nine-year-old daughter is a huge fan of the WyldBoyZ, and Luce knows that once all this gets out, little Melanie would be heartbroken. It’s bad enough that any of the members could be a suspect in the killing, but all of them also have a motive—after all, it’s no secret how Dr. M treated them, and the rumor was that they were about to break up. No matter how things play out, it’s looking like the end for the WyldBoyZ.

Still, there is a murder to be solved and Luce is too good a detective to let anything get in the way of her job. Together with her partner Mickey Banks, they start putting together a list of persons of interest to interview, which is not limited to the band members. There’s a rather huge list of party attendees to comb through, which includes the WyldBoyZ’s extensive crew of roadies as well as a number of megafans who were lucky enough to be invited, and of course, there’s also Dr. M’s wife herself, the inscrutable Mrs. Marilyn Bendix. Any of them could have done it, and Luce must race the clock to get to the bottom of the mystery before the case is taken out of her hands.

Does this plot sound completely weird and absurd? Yes, but hear me out—The Album of Dr. Moreau is a legit locked room murder mystery featuring a classic detective storyline structure complete with red herrings, complex clues, and of course plenty of suspenseful surprises. Luce Delgado is an empathetic but also intelligent and tough-as-nails kickass female sleuth I was happy to see on the case, as her fierce tenacity is matched only by her sense of decency and compassion.

And boy, was this book funny! As a preteen in the 90s, I was sort of at the heart of the boyband craze, and while my musical interests ran more towards alternative rock and grunge, back then my CD tower also contained its fair share of albums from the likes of The Backstreet Boys, *NSYNC, Westlife, Take That, and—oh heck, you get the picture. Looking back, it was definitely a pop culture phenomenon, one which Gregory does not hesitate to exploit or poke fun at mercilessly for this novella, and for that I am grateful because it resulted in lots of laughs. For you see, while the WyldBoyZ may be a completely unique and original creation, they are similar to their inspirations in that the band’s music is only a small part of their success, with the arguably more important part being made up of the group’s carefully managed image. With his sharp sense of humor but also what’s clearly a deep affection, the author pays homage to these defining stereotypes and idiosyncratic characteristics of 90s boybands using witty references, clever puns, and other little bonuses and easter eggs related to that style of music and their fanbase at the time. Just take a look at the chapter headings to see what I mean.

Finally, this being a book by Daryl Gregory, you can of course expect his signature flair for the uncanny. While the story is a mystery at its heart, there are also several plots exploring its more supernatural aspects, not to mention a few nods to the original H.G. Wells classic The Island of Dr. Moreau whose “Beast Folk” provided much of the basis for the members of WyldBoyZ. Add in some weightier social topics and emotional content, and you have yourself a compelling and thought-provoking read.

In sum, I’m usually very picky with novellas, but The Album of Dr. Moreau impressed me in that it was the perfect length to deliver this story’s main ideas and themes. Check it out, and just be sure to have a couple hours uninterrupted reading time before you do, because I promise you’ll not want to stop once you start.

18 Comments on “#WyrdAndWonder Novella Review: The Album of Dr. Moreau by Daryl Gregory” 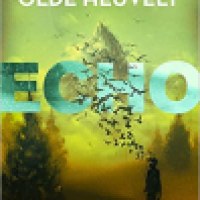