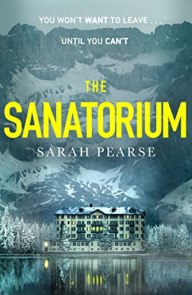 The Sanatorium by Sarah Pearse

In general, I don’t think I demand a lot from thrillers. All I want is a storyline that can keep my attention—preferably the whole way through. However, this was unfortunately not what I got from The Sanatorium. The book had its high points, but sad to say, on the whole it did not live up to my expectations.

The story follows former detective Elin Warner, who has just arrived at an isolated hotel situated in the Swiss Alps with her boyfriend Will. Still recovering from a traumatic incident during the last case she worked, the last thing Elin wanted to do was to travel so far, but her brother Isaac had just gotten engaged and she and Will were supposed to meet him and his fiancée to celebrate.

Of course, it doesn’t help that Elin and Isaac are not on the best of terms. Many years ago, their younger brother Sam drowned in what everyone said was a tragic accident, but the family never recovered from the loss. Worse, Elin suspects that Isaac may have had something to do with Sam’s death. This getaway was supposed to be her and Will’s chance to grow closer and decide the next step of their relationship, but instead, Elin is determined to finally force the truth out of Isaac about what really happened to Sam.

Before Elin can get far in her quest though, something terrible happens. Isaac’s fiancée Laure goes missing, sending Elin into detective mode. As a storm rolls in, cutting the hotel off from any help, the claustrophobia grows, and panic begins to set in among the staff. Elin’s first instinct is to suspect her brother, whom she still does not trust, but he appears to be just as distraught as everyone else. And then the first body is found…

Ah, the mystery thriller set in a snowbound setting, one of my favorite genre tropes! I had such high hopes for The Sanatorium, so to say I’m disappointed is an understatement. I mean, this wasn’t a bad book, but it wasn’t great either. Even from the start, the story struggled to sink its hooks into me. Elin was annoyingly two-dimensional and single-minded to point of recklessness, yet she seemed to be the only person with any agency among this cast of do-nothings, and this I found more exasperating than comforting.

Also, I hate to say it, but the plot suffered because two separate story threads were constantly fighting to dominate the reader’s attention, and in the end they both felt contrived. Elin’s suspicion of Isaac and the possible role he played in Sam’s death all those years ago was an interesting idea, but seriously, just how much was I supposed to care while people were literally being murdered left and right? You’d think the protagonist would come to her senses and realize there’s a better time and place to obsess about confronting her brother and resolving all these age-old hang-ups—you know, preferably when there’s not a crazed psychopath on the loose—but hey, that’s Elin for ya.

There was also a fair bit of repetition. I wouldn’t have minded the slow build-up so much if we didn’t always have to go through this cycle of Elin doubting herself, slowly gaining more confidence, then having something bad happen which would send her straight back to square one. It’s a shame because there are good ideas her, not to mention all the ingredients to an awesome locked room mystery, but between being jerked around by the plot and getting the urge to scream at the protagonist every time she did something frustrating, I just couldn’t fully appreciate it. Of course, I could also go into how underwhelmed I was by the ending, but given everything else I found underwhelming, that’s probably a moot point by now.

Still, to the author’s credit, she nailed the atmosphere perfectly. Since it was the former-sanatorium-turned-luxury-resort-spa setting that drew me to this novel in the first place, I don’t completely regret picking it up. It’s definitely worth a look if you enjoy wintry thrillers, especially the sort with murderers and stranded guests trapped in creepy, snowed-in hotels. That said, other books have done it better, and if you’re an avid reader of the genre, this one has areas you may find lacking.

16 Comments on “Audiobook Review: The Sanatorium by Sarah Pearse”