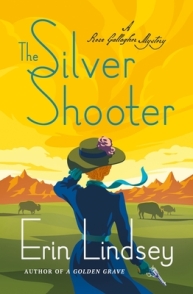 The Silver Shooter by Erin Lindsey

I’d like to think Erin Lindsey and I are on similar wavelengths! I’ve been really enjoying her Gilded Age paranormal historical mystery series, and at some point while reading the last book, the thought did cross my mind that given the time period, wouldn’t it be amazing if she did a story set out in the Old West?

Enter the third Rose Gallagher novel, The Silver Shooter, which is exactly that! The intro sees our protagonist settling into her new life as a Pinkerton agent, working with her former-employer-now-partner Thomas in their special area of supernatural investigations. The job means keeping a low profile and the real nature of their work hush-hush, of course, but that’s not the only secret Rose has to keep. The romantic feelings between her and Thomas have been smoldering for a while, but because of the difference in their stations, she knows nothing could ever come of them.

Still, no one could have expected the ever-charismatic Theodore Roosevelt to step in, hiring the two of them to investigate a series of troubling occurrences happening around his ranch out in the Badlands. Horses and cattle have been disappearing, taken by something neither human nor animal. The mutilated bodies would be discovered later, torn apart by something huge and powerful. Lately, it is said that humans have been going missing too, many of them starry-eyed prospectors who have come from far and wide, drawn to the rumors of a lost treasure buried somewhere among the hills. Now, it’s up to Rose and Thomas to get to the bottom of the mystery before the fear and panic can boil over, taking the town down with it.

Oh, my Westerns-loving heart was so happy reading this book, and not just because it was set in the wild frontier of the 1880s Dakotas. It was also a nice change of pace for Rose and Thomas to be out of New York, far removed from their natural habitat and comfort zone of the city, not to mention a good opportunity to introduce a different kind of story with never before seen elements from this series. While the previous volumes have dealt mostly with ghosts and spirit trouble, in The Silver Shooter our protagonists are trying to chase down a creature that is far more tangible and dangerous. A powerful mystery still persists throughout the central plotline, of course, but for the first time in this series, we also get a strong sense of action and adventure.

And then there was the effect of the environment on our characters. Away from the swells of Manhattan, Thomas experiences a transformation, losing his upper crust rigidity and becoming more spontaneous and passionate, which I enjoyed seeing. Obviously, it was a change Rose could appreciate as well, finding the new Thomas irresistible. On her part, the lawlessness of the west also meant Rose was able to let loose and get away with many of the “improprieties” that would have gotten her spurned back home (like wearing trousers, how scandalous!) Free from having to keep up appearances, the romance between them really took off in this novel, and I think readers will delight in the progression of their love story which has been relatively lowkey and slow-burning thus far.

Now, whether these effects will last beyond the ending, I will not say as not to spoil anything, but if you’ve read the author before, you’ll know that she has a talent for writing a well-balanced romance that doesn’t distract from the main plot. Mixing swoony fun with deep emotion, this story has just enough romance and suspense to keep you rooting for Thomas and Rose to get together, but it is still a monster-hunting mystery at its core. Given that there will be more supernatural adventures in our characters’ futures (at least I hope), Lindsey is definitely saving more relationship development for later books!

When all is said and done, what we have here is a stellar sequel, and it is very encouraging to see both character and story still going strong. If you’re a fan of speculative fiction with just a dash of romance, I highly recommend checking out Erin Lindsey’s books, and if you also happen to enjoy historicals, you’ll find that the Rose Gallagher series has that added appeal. Like the volumes before it, The Silver Shooter is fantastically well-researched and richly detailed, helping bring the Old West setting to life. After the new elements introduced in this book, I am even more excited to see where the series will take us next.

Audiobook Comments: This was the first book in the Rose Gallagher series I listened to in audio, and I was really surprised how well narrator Barrie Kreinik’s voice matched up with my idea of Rose. I liked her performance very much, and thought she did an excellent job bringing the story and  characters’ personalities to life.

More on The BiblioSanctum:
Review of Murder on Millionaires’ Row (Book 1)
Review of The Golden Grave (Book 2)

20 Comments on “Audiobook Review: The Silver Shooter by Erin Lindsey”