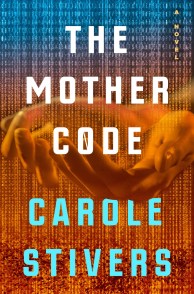 The Mother Code by Carole Stivers

So, I had some mixed feelings for this book. The premise was solid and intriguing, and the science behind it fascinating—not surprising, considering the author is a biochemist by trade and is clearly knows her subject. But on the flip side, the weaker story elements made for a frustrating, unfocused read.

It is the year 2049. Civilization as we know it is about to end, as a DNA-based nano bioweapon is unleashed upon the world and begins to mutate and spread out of control. Top scientists are scrambling to find a cure, and when that proves not enough, they turn to more drastic measures, like genetically engineering children to be grown inside artificial cocoons and be raised by robots. To achieve this, they developed the Mother Code—an intelligence programmed into the machines to give them individual personalities, which would also help them better understand the concepts of maternal responsibilities and instinct.

Years later, in the deserts of Utah, a human child named Kai is born to one of these robots, designated Rho-Z. As they wander the wilderness, looking for others like them, Rho-Z teaches Kai the ways of the world and how to survive in it, the way a real human mother would. Much of the story is split between the past, focusing on the actions of the scientists who created the Mother Code, and in the post-apocalyptic world, in which children like Kai are gradually learning the skills required to one day reintegrate into society, all the while being completely devoted to their robotic mothers. However, even as Kai grows and thrives, changes are occurring in Rho-Z’s programming. Ultimately, she and others like her would be targeted for destruction, leaving Kai with a difficult decision.

While I’m not the biggest fan of duo timelines, I’ve read books that utilize them to great effect, and when they work, they can really add to a story. But somehow in The Mother Code, the two threads simply refused to jive. It also gave the book a sense of being confused, like it wasn’t sure what it wanted to be—a rousing tech-thriller, or a heart-warming tale about an unconventional parent-child relationship? I could appreciate the story Carole Stivers wanted to tell, and it’s certainly one that would only make sense if we could see both sides—both past and present. But this format wasn’t the best.

As a result, I could only feel invested in specific parts of the novel, and maybe the terrifying aspect of an uncontrollable manmade plague had something to do with it, but I definitely latched on to the apocalyptic timeline. The book worked better as a thriller, highlighting the desperation of the world’s plight and the scientists’ race against time to find a solution. The science behind the story is brilliant and sharp, but does also require some background knowledge in the subjects, or at least some patience, to fully appreciate.

That’s not to say I didn’t enjoy the sections featuring Kai and Rho-Z, but while I really like softer, glowing tones of their relationship, the structure of the book was not at all conducive to helping the reader feel emotionally invested in either of them. The characterization also wasn’t the strongest, and there are quite a few POVs to follow. Even the scientist characters felt kind of faceless and hollow, because you had such a strong emphasis on the research and following the progression of the outbreak, there was hardly enough time to develop the people in depth. As well, constantly flipping back and forth between the many perspectives only served to disrupt the pace and increase this emotional distance between the reader the characters.

In short, I think there’s a great story in The Mother Code. Certainly, at its heart is a thought-provoking concept that sci-fi fans with an interest in hard science married with realism would love, especially if you’re into “what-if” scenarios and themes dealing with artificial intelligence, plague outbreaks, and biochemical warfare. That said, at times the content does get a little too technical, and the plot’s disjointedness and pacing issues also made it hard to connect with the characters. Personally, I would have liked to see more developed characterization, smoother transitions between POV changes and improved flow, but going forward, I wouldn’t discount the possibility of reading Carole Stivers again, as she’s obviously got some tremendous ideas for stories.

20 Comments on “Tour Review: The Mother Code by Carole Stivers”