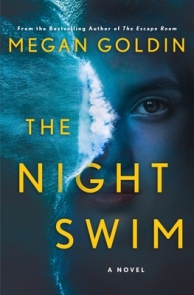 The Night Swim by Megan Goldin

The Night Swim by Megan Goldin will haunt you, but in a good way. After my first spin with the author’s The Escape Room last year, I think I expected something similarly twisted, irreverently over-the-top and just off-the-wall insane and unpredictable when I picked this one up. But instead, what I got was a mystery-thriller that was much more introspective, resonating, and heartbreaking.

The protagonist of the book is Rachel Krall, creator and host of “Guilty or Not Guilty”, a true crime podcast that has taken the country by storm and catapulted her name to instant fame. In spite of that though, Rachel tries to keep a low profile, avoiding public appearances and having her photo in the media. Which is why, upon her arrival in the small town of Neapolis, she is surprised to find she is recognized, by someone who leaves an anonymous letter on her car windshield, begging Rachel to use her podcast to help.

Having come to Neapolis to report on a notorious rape trial that has received national attention, Rachel nevertheless becomes intrigued by the mysterious note’s author and contents. While everyone in town is focused on the trial involving local college student and swim prodigy Scott Blair and his alleged rape of a teenage girl, Rachel begins doing another investigation of her own, unable to ignore the desperate pleas of the anonymous notes that just keep on coming. Further research leads her to the case of another sexual assault victim named Jenny Stills, whose body was found off the Neapolis pier twenty-five years ago. Although the police reports all say cause of death was accidental drowning, the writer of the notes who claims to be Jenny’s younger sister insists that she was murdered.

As the present timeline continues forward chronicling Rachel’s coverage of the Scott Blair trial, another perspective provided by Jenny’s sister through her letters gives us a look back into the events of the past. In this way, the traumatic experiences of two abused young women, separated by a quarter of a century, are revealed to us through Rachel’s tireless investigations on both cases, which also uncovers startling parallels and more difficult questions. After both the prosecution and defense teams finish laying out their convincing arguments in the courtroom, what will be the verdict? And while many in town still remember Jenny Stills, why are they all so reluctant to talk about her? Finally, who is Jenny’s sister, and why won’t she agree to meet Rachel face-to-face?

I thoroughly enjoyed The Night Swim, a novel that is one-part mystery and one-part court drama, with a slight bit of thriller thrown in. As I said, the story felt very different from my one and only other experience with Goldin’s work, the completely ridiculous yet entertaining romp that was The Escape Room. While my enjoyment of that book was entirely predicated on my ability to suspend my disbelief, this one, in contrast, did not exhibit the same kind of cheeky, throwaway quality. And whereas The Escape Room succeeded because you were never meant to take the premise all that seriously, The Night Swim on the other hand is deadly serious, tackling themes that are darker, heavier, and meant to stay with you for a long time.

After all, few topics are more timely or relevant in today’s society than some of the ones addressed in this book. Foremost of these is the subject of rape and the silent suffering of victims, particularly those who are young and vulnerable, singled out for discreditation and are powerless to speak out against their abusers. It is heavily implied the only reason there even is a trial in Neapolis is because the victim’s grandfather was the chief of police, and the sentiment is split regarding the accused, who is the town darling and an Olympic hopeful. Meanwhile, despite privacy laws protecting minors, everyone already knows the identity of the victim. Unfortunately, secrets are hard to keep in a small town, but there’s always plenty of gossip and rumor, and readers know with a dread that no matter what the jury decides in the end, a young girl’s life is going to be destroyed forever.

I also liked the character of Rachel Krall, who is motivated by the search for truth as well as a genuine desire to help others. At first, believing she had failed someone in overlooking her previous requests for help, Rachel is driven by a sense of responsibility, but then becomes more and more entrenched in the mystery surrounding the circumstances of Jenny’s death as more information comes to light. All I can say is my heart broke for the Stills girls, and there are things in this book that will leave you feeling raw from the inside out.

The thrills are actually quite minimal, mostly coming into play in the end. In general though, I would classify The Night Swim as more of a mystery with a good dose of gripping courtroom trial-related suspense. There are some surprises, but ultimately what this book delivers is an unflinchingly searing look into the way many rape cases are perceived. All told, Megan Goldin has created this emotional crime thriller from the seamless integration of two stories separated by a generation, and at its heart is a determined heroine who ties it all together.

20 Comments on “Book Review: The Night Swim by Megan Goldin”