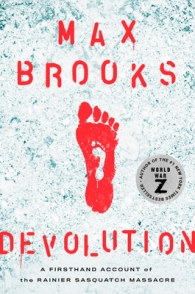 Max Brooks, the creative mind behind World War Z, returns to horror with another epistolary-style novel, this time taking us deep into the forests of the pacific northwest where an unfortunate group of neighbors have a deadly encounter with Bigfoot. The story is presented to us in the form of a series of documents collected by a journalist writing a book on the incident, but most of it is made up of entries from the diary of Kate Holland, the closest thing we have to a main character. She and her husband Dan have just moved into the secluded community of Greenloop near the base of Mount Rainier in Washington, a small little piece of paradise developed by tech tycoon Tony Durant who also lives there with his family. The other residents are also as you would expect—wealthy loners or progressive intellectuals who want to live off-the-grid and be “one with nature,” but also can’t do without their modern comforts and high-tech gadgets.

Sure, it’s an isolated life, but there’s no denying it’s peaceful, comfortable, and above all, idyllic. It’s the perfect retreat from the hustle and bustle of the outside world, and for a while, Kate truly believed she and Dan could be happy here. But of course, that was before the catastrophic eruption of Mount Rainier, causing chaos in the entire region and cutting off all access and lines of communication to Greenloop. With no way to get the word out or any supplies in, the residents hunker down for what they expect to be a long time before any rescue comes. With a new vegetable garden planted and a rationing system in place, they might just make it…until they realize that all along, they have been sharing these forests with another predator. These creatures have also been displaced by the volcanic eruption, and they too have been driven to desperate measures to survive.

So, first let’s talk about the positives. Much like World War Z, Devolution is a fictionalized oral-history-or-firsthand-account-type piece of investigative work that seeks to piece together a momentous event in the past. Possibly, Brooks was hoping to catch lightning in a bottle twice by attempting a similar style and format for this novel, which is good news if that’s what you had in mind. Personally, I loved it—the novelty clearly hasn’t worn off for me yet, but then again, I’ve always been a sucker for epistolary novels despite some of their limitations, which I’ll talk about in a bit.

Because now, for the not-so-great, which is really a compounding of a bunch of minor gripes that made Devolution less than convincing. Yeah, yeah, I know, writing a believable Bigfoot story would be a tall order (har har) even under the best of circumstances, but there was simply too much here that felt…off. First of all, to create the perfect storm of conditions which would allow this book to make sense, we had to put together an extreme situation where a group of people would be completely cut-off, isolated, and pathetically helpless in the woods should a major disaster strike—and so we have Greenloop, populated by residents that read like they’re torn right out of a straight-to-the-Syfy-channel B-list movie.

Needless to say, it’s difficult to find too many of these characters likeable. Even with Mostar in the picture, I also find it hard to believe that a bunch of bleeding hearts could suddenly make an incredible transformation into Rambo overnight. There’s actually a line in the book where an observer notes the similarities between the Greenloop residents’ defenses and the guerilla warfare tactics used during the Vietnam War, and marvels at the way such ideas can span space and time. Nah, the reality is, one of Kate’s friends probably just saw it in a movie somewhere. It’s this attempt to make everything seem more profound than it is which kind of grated on me, though to its credit, the novel did get one thing right: Mother Nature does not play nice. Still, even then, the author fudges a lot of the details to try and make this point. In college, I had the pleasure of studying primatology in order to complete an anthropology degree, and while much of the science behind great ape biology and social behavior in this book is true including chimpanzee aggression and intelligence in group hunting, when it comes to his Sasquatches, Brooks can’t seem to decide if he wants them to be highly intelligent or mindlessly savage, so he switches between the two willy-nilly in order to suit his needs.

And then there’s the writing. I mentioned the limitations of the format, the biggest one being the challenge of creating a sense of in-the-moment urgency from something that you know was written in the past. As such, Kate’s diary entries do not actually read much like diary entries, no matter how many times she tries to convince us she’s writing like this to preserve a perfect record for posterity. Still, most readers are well aware this is not how average normal people write in their diaries, but we are willing to overlook it anyway for the sake of enjoying a story. However, the problem stems from the sheer number of action scenes in Devolution, which after a while make Kate’s narrative feel awkward. Worse, it even gave some of the more intense, brutally violent and gory sequences the opposite effect, making them feel over-the-top and goofy instead.

There were a few more issues here and there, but I think by now I’ve covered the major ones. This will probably come as no surprise, but I can’t say I thought Devolution was amazing, though I suppose it delivered a fair bit of entertainment. If having that is your goal, then this book will do just fine, but I confess to being somewhat disappointed considering I really enjoyed World War Z and was so looking forward to a new novel by Max Brooks. At least the audiobook, read by a full cast including such big names as Judy Greer, Nathan Fillion, Jeff Daniels, Kate Mulgrew and more was simply a blast, and I’m glad I got to listen to it.