YA Weekend: The Archer at Dawn by Swati Teerdhala 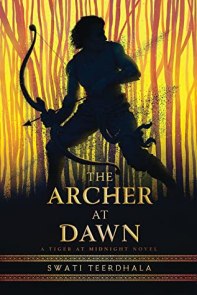 The Archer at Dawn by Swati Teerdhala

Series: Book 2 of The Tiger at Midnight Trilogy

I adored the first book, The Tiger at Midnight, and thought it was an incredible intro to the gorgeous, resplendent world created by Swati Teerdhala. Inspired by the culture of ancient India and Hindu mythology, this story takes readers to a kingdom in rebellion, and at the heart of the conflict are two characters—once at odds—who are now slowly becoming friends and perhaps something more.

Esha, known as “The Viper”, is an assassin for the rebels. Kunal was a soldier for the empire, tasked to hunt her down. However, fate had other ideas, and now they find themselves on the same side, fighting to retrieve a long-lost princess from the clutches of her captors. The Archer at Dawn picks up where the first book left off, with our characters planning a daring mission to infiltrate the Sun Mela, an event that is both a celebration and a competition of wills held at the grand palace. Kunal’s experience in the Senap Guard puts him in position to be the perfect spy; he will return and take up his old post, providing security during the festivities while keeping his eyes and ears open for news of Princess Reha. Esha, on the other hand, will don a disguise and play advisor to Prince Harun, who needs to make a visible presence at the Sun Mela to recruit more allies to the resistance.

Unfortunately, problems arise not long after their operation begins. Esha discovers that those who murdered her family are in attendance and is overcome with the desire for revenge, even though it will jeopardize the rebels’ mission. As well, they are not the only faction with a hidden agenda, as the Crescent Blades learn of other players pulling the strings in this deadly game. Kunal also returns to the guard and finds that things are no longer the same between him and his former comrades now that his eyes have been opened to the truth of his commanders as well as rebellion’s cause. Not to mention, as the situation between him, Esha, and Harun grows more complicated, difficult questions are raised and loyalties are tested.

All told, The Archer at Dawn was a proficient sequel, though I feel it is quite common for second books to struggle to maintain the same momentum. This one doesn’t suffer the same way, per se, but I did find it just a shade less engaging as The Tiger at Midnight. The storytelling wasn’t as tight this time around, nor was it as exciting, though given how significant the theme of subterfuge was for the premise, perhaps that’s understandable. Admittedly, I was also a tad annoyed with the love triangle that was being teased here. Granted, it wasn’t overpowering, and I appreciated the author’s attempt to make it subtle. Still, it begs the question, then why bother have it at all? The plot would have been perfectly fine without it, and we wouldn’t have had to put up with Esha’s constant whining about her tortured feelings for Harun as she and Kunal grew closer. It just seemed like an unnecessary point of drama.

That piece of criticism aside though, I enjoyed seeing our characters continue to grow and find themselves. Kunal probably went through the most drastic change here; he has so much honor and discipline, but his time with Esha and the rebels has made him see that things are not so simple. Although he has a new reason to fight, there are still ties to his past that can’t be forgotten so easily, especially when he finds himself back in his old life trying to play at being the loyal soldier. Esha also continues to grow on me, despite her hemming and hawing over her relationships issues. We knew from the start the romance between her and Kunal would be a journey fraught with obstacles, but it was definitely handled better in the first book when it was a dangerous game of cat-and-mouse replete with innuendo and sexual tension. I do enjoy the progress they’ve made in their relationship, but at the same time I don’t want this tug-o-war of emotions to get too stale.

Still, there’s so much to get excited about. The world-building is superb as always, and we’re showered with even more historical and mythological elements in this sequel. The Sun Mela celebrations and games provided many opportunities to showcase the people and cultures of the world, and Teerdhala deftly weaves magic and wonder into the mix. There were also some rather cool revelations towards the end, which certainly ratcheted up the pacing and interest in the next installment.

Bottom line, if you were a fan of the first book, you owe it to yourself to pick up The Archer at Dawn to find out how the story continues. I found myself amazed and delighted, even though this novel took the series in a slightly different direction by emphasizing subterfuge and political intrigue. Ultimately, it was done in a clever and compelling way, and I am eager to see how the trilogy will wrap up in the next book.

More on The BiblioSanctum:
Review of The Tiger at Midnight (Book 1

24 Comments on “YA Weekend: The Archer at Dawn by Swati Teerdhala”