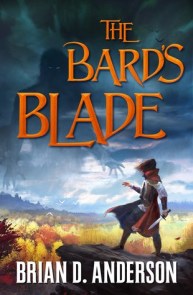 Series: Book 1 of The Sorcerer’s Song

It’s always good to get back to the basics, and this, I think, was the key to the huge appeal behind The Bard’s Blade, which I enjoyed immensely. Author Brian D. Anderson reminds us all that an epic fantasy novel isn’t required to be filled with sweeping battles, an indecipherable morass of politics and magical systems, or enough characters to fill a small village in order to be a hit with readers. Sometimes simple is best, even though finding that sweet spot between originality and conventionality can be tricky. However, I think Anderson manages to strike the right balance.

In this opening volume of a series called The Sorcerer’s Song, our story first begins in a sheltered little realm called Vylari which is magically protected by a barrier hiding it from Lamoria, the dangerous world beyond. Vylari is also home to Mariyah, the daughter of a wine merchant, as well as her betrothed, a talented musician named Lem. Like any young couple, they are planning for their future, even with its countless obstacles. Mariyah, with a good head for business, knows she will need to stay and help her family, but neither does she want Lem to have to give up his traveling and music, knowing how much it means to him. Young and in love though, the two of them are confident they can overcome any and all challenges, as long as they are together. Life was simple, happy and good.

However, all that calm is shattered one evening, as Lem receives an urgent summons from his uncle Shemi to come home. Upon returning to the house, Lem finds a strange visitor waiting, bearing an ominous message prophesizing the return of an ancient evil. The stranger also claims to have come from Lamoria, which shouldn’t be possible, as no one should be able to breach the magical wards—except, as Shemi reluctantly admits, it’s actually happened once before. Lem’s mother had purportedly passed over and come back, bearing him in her womb. Rocked by these revelations, Lem is driven by the need to know the truth of his origins as well as to fulfill his quest on this new path destiny has set for him. To stop a rising darkness and protect those he loves, he will need to leave Vylari—and, as much as it breaks his heart, Mariyah.

What Lem didn’t count on though, is his beloved’s strength and daring. Frightened for him, and also furious that he had left without even saying a last goodbye, Mariyah decides to follow Lem into Lamoria, despite Shemi’s fervent objections that his nephew would want her safe in Vylari. But ultimately, both of them end up crossing the barrier, on what will be a long and harrowing journey to find and help Lem.

What follows is a rollicking adventure, told on two fronts. One thread follows Lem as he attempts make a life in Lamoria, navigating its strange and alien customs in order to secure himself a source of income and a place to stay. The people he encounters are nothing like the kind, hospital folk of Vylari; instead, many of them are cutthroat, scheming, and openly aggressive towards newcomers. In spite of this, Lem manages to find work as a musician, gradually making a name for himself. Meanwhile, Mariyah and Shemi are dealing with troubles of their own. Their kind and trusting natures, shaped by a lifetime of living in friendly Vylari, have now become their greatest weakness, making them vulnerable and naïve to the realities of Lamoria. In this storyline, Mariyah learns the hard way how seriously the people of this world take their religion, landing in hot water when she and Shemi are arrested for being heretics, for there is no tolerance even for outsiders unfamiliar with the ways. By the time Lem discovers that they had followed him to Lamoria, it may already be too late.

I’m very tempted to call the tone and style of The Bard’s Blade traditional, and yet, that’s also not quite accurate. Sure, there are certain themes of the novel that fit my expectations of a conventional fantasy quite comfortably, like a well-worn cozy sweater. Take the guileless young hero, for example, setting off on an epic quest to stop the evil bad guy from destroying the world. However, try to look beyond that, and you might see that the story actually offers a lot more. You have Lem and Mariyah, a courageous young couple who are more than they seem. Indeed, while their devotion to each other drives much of the narrative—especially in the second half, where both are coerced into their respective new vocations—this is not going to be your typical “love will conquer all” story. Plenty of exciting developments and surprising twists await you, and Anderson does a fantastic job with his storytelling, maintaining a high level of intrigue while providing great fun.

I’m also impressed at how streamlined everything feels. Tightly plotted with none of the bloat, The Bard’s Blade was a novel I breezed through effortlessly, as the story kept up an energetic and driving pace. Though the world-building was on the lighter side, I appreciated the fact that we were constantly moving forward, unhindered by bulky exposition or extraneous detail bogging things down. In this way, it was easy to become completely drawn in and addicted to the narrative.

All told, if you’re in the mood for an invigorating adventure, I can’t recommend The Bard’s Blade enough. For pure and perfect escapism, it doesn’t get any better than this, especially if you’re looking for a modern fantasy told in an old-school flowing style to whisk you away. High recommended, and I can’t wait to see what’s next.