First, with big thanks to Harper Voyager for the following: an ARC of Aurora Blazing by Jessie Mihalik! I really enjoyed Polaris Rising last year and I’m looking forward to this follow-up. I also received an ARC of Flamebringer by Elle Katharine White, the third and final volume of her Jane Austen-inspired Heartstone fantasy trilogy. From the publisher I also received a couple of finished copies, including the exciting novella To Be Taught, if Fortunate by Becky Chambers as well The Emperor’s Fist by Jay Allan, the latest installment in his Far Stars sequence!

Courtesy of Harper I also received an interesting surprise in the form of The Andromeda Evolution by Daniel H. Wilson and Michael Crichton. Apparently this is the sequel to Crichton’s Andromeda Strain to mark the 50th anniversary of its release. While I have my reservations, I do like Daniel Wilson, so I’ll be curious to see how this one goes.

Also thank you to St. Martin’s Press for sending me an ARC of A Golden Grave by Erin Lindsey! I love her books, and I’ve been looking forward to reading this sequel ever since reading Murder on Millionaires’ Row.

From St. Martin’s Press I was also lucky enough to score an ARC of 29 Seconds by T. M. Logan from a newsletter giveaway. I read the author’s novel Lies so I’m quite open to giving this one a try as well.

With thanks to Aladdin/Simon & Schuster, I also received a surprise copy of the The Okay Witch by Emma Steinkellner. I’m not sure this one’s really for me since it’s a graphic novel aimed at Middle Grade readers, but my daughter has expressed interest in checking out and I’ll be sure to report what we think if she does!

Another surprise arrival, I also received an ARC of The New Voices of Science Fiction edited by Hannu Rajaniemi and Jacob Weisman from the kind folks at Tachyon Publications. This looks like a promising anthology, with an incredible author lineup including some big names and up-and-coming rising stars like Rebecca Roanhorse, Sarah Pinsker, Suzanne Palmer, and more.

Also huge thanks also to Ace/Roc/DAW for these lovelies, including this beautiful finished copy of The Harp of Kings by Juliet Marillier, one of my most anticipated releases for this fall! From the publisher I was also excited about the arrival of this ARC of Unnatural Magic by C. M. Waggoner, a book I had featured earlier this year for Waiting on Wednesday, as well as A Song for a New Day by Sarah Pinsker who is an author I’ve always wanted to try!

I’d also like to thank Tor.com for the following new arrivals: first, an ARC of Riot Baby by Tochi Onyebuchi, a sci-fi novella described a dystopian narrative about the black American experience, and also a finished copy of Gideon the Ninth by Tamsyn Muir. It can’t really be seen in this picture, but this gorgeous hardcover has black sprayed pages, which is one of my favorite design features because it gives a book that certain dramatic flair! I’m currently reading this book as part of a blogger buddy read right now, so I expect a review will be along soon.

Big thanks also to Tor for Turning Darkness into Light by Marie Brennan, her new standalone novel that spins off The Memoirs of Lady Trent series. I’ve already devoured and reviewed this, and in case you missed it, you find the link below for my full thoughts! As well, I received an ARC of Sabbath by Nick Mamatas, described as “Highlander meets Se7en.” Now how can I resist such a tagline?

And thank you to Titan Books for Wonderland edited by Marie O’Regan and Paul Kane. As you know I’m quite picky about my anthologies, but a collection of short stories inspired by Alice’s Adventures in Wonderland is definitely not something I can say no to, especially with an author list that includes some of the biggest names in fantasy and horror.

And finally, thank you to Penguin Books for This Poison Will Remain by Fred Vargas. The book sounded very interesting when I was reading the pitch, though I was hesitant to try it when I found out it was technically the eleventh volume of the Commissaire Adamsberg series. But apparently it can be read as a standalone, so I think I will give this one a try if I ever feel like a suspenseful crime mystery. 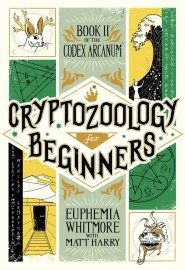 Not much in the digital pile this week because I’ve been trying to show more restraint on platforms like Edelweiss and NetGalley. But a couple books did catch my eye. With thanks to Inkshares, I snagged Cryptozoology for Beginners by Matt Harry, described as a part novel, part magical creature guide with illustrations. I also grabbed The Menace from Farside by Ian McDonald with thanks to Tor.com. I don’t read too many novellas, but I knew I needed this as soon as I saw that it was part of the Luna series. And last but not least, I was pretty excited to receive an eARC of Forever and a Doomsday by Laurence MacNaughton, with thanks to Kaye Publicity and Pyr Books. This is the fourth book of the Dru Jasper urban fantasy series, and I love the cover’s color scheme this time!