Book Review: The Girl Who Could Move Sh*t With Her Mind by Jackson Ford 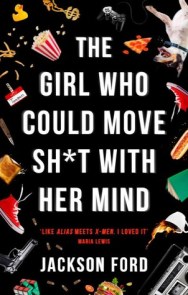 A literary tour de force this was not (but I mean, you’ve probably gathered that from the title already), but still most definitely a ton of fun (again, the title). The Girl Who Could Move Sh*t with her Mind by Jackson Ford is the perfect book to read for pure irreverent and action-packed escapism.

Meet Teagan Frost, a young woman who possesses incredible psychokinetic powers, something that the government is all too willing to exploit for its own purposes. Under the cover of a moving company, Teagan and the other members of her team are dispatched on various top-secret missions by their handler Tanner to deal with threats to national security.

However, things go spectacularly wrong on their latest mission, when the only way they could get away was with Teagan taking a flying leap out the window of a skyscraper with one of her freaked out teammates in tow. Only by using her PK was she able to save them both. After that fiasco was over, all Teagan wanted was to sleep for a year, but no sooner had she settled down than she was woken up by an urgent phone call demanding her return to headquarters. In a panic, Teagan arrives expecting everything to be in a state of emergency. What she did not expect was to be accused of murder, with her teammates in a fury and ready to arrest her. Back at the site of their bungled mission, it appears that the body of their original had been found, killed by a length of rebar wrapped around his neck. As far as everyone was concerned, only someone with Teagan’s powers could have done something like this, and since there’s no one else like Teagan in the world, she had to be guilty.

But Teagan knows the truth: there had to be someone else out there with PK powers, an idea that both excites her and scares her. Now she has less than 24 hours to prove her innocence, and the first step towards clearing her name is to track down the real killer.

I confess, this was a purely indulgent read for me; I wanted something fast-paced and fun that read like an action-comedy movie and The Girl Who Could Move Sh*t with her Mind gave me exactly that. Despite all the comics and comic book character related references, this isn’t really a superhero novel, but it sure as hell reads a lot like one, incorporating themes like secret identities, uncanny origin stories and a super scary evil villain. Its freewheeling plot starts off running and doesn’t take a break for anything, so be prepared to keep up.

Fortunately, books like these are usually pretty simple and straightforward, though that being said, they don’t often give the reader anything or special too unique either, for all that they are full of humor and well-timed and engaging banter. But that’s where the characters come into the picture. Here, the narrative unfolds by alternating between following Teagan and Jake, the out-of-control PK she’s trying to track down and capture. At first, I felt that the reveal of the target so early on might have been a misstep, but my mind was quickly changed as Ford gradually allowed us to go deeper into Jake’s complicated and twisted psyche. His actions, behaviors and origins suggest a deeper mystery to be solved, adding an extra layer of intrigue to the plot. Teagan herself is also a formidable protagonist and a joy to follow, and her determination and optimism is admirable, considering the impossible challenges she must face and all the hardships she’s had to endure in the past.

To tell the truth, there’s not much left for me to say int his review, but that some books are just plain fun to read. And if fun is what you’re looking for, then The Girl Who Could Move Sh*t with her Mind is the exactly kind of novel you’ll want to take to the beach or to curl up with in your favorite reading nook after a long day—the perfect blend of action, humor and sci-fi to fulfill all your needs of escapism and entertainment.

← Book Review: The Girl in Red by Christina Henry
Most Anticipated Releases of 2019: July to September →

27 Comments on “Book Review: The Girl Who Could Move Sh*t With Her Mind by Jackson Ford”