Book Review: The Girl in Red by Christina Henry 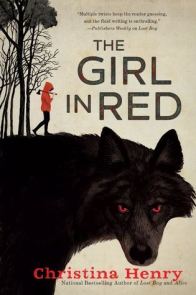 The Girl in Red by Christina Henry

First of all, it’s always a joy to read the gritty retellings of fairy tales by Christina Henry, and The Girl in Red captured my attention in particular because of its slightly different approach. Whereas the novels of the Alice duology and Lost Boy took place in a more abstract and fantastical context, this one felt relatively more realistic and urban in a “zombie apocalypse” kind of way, featuring a family’s fight for survival in the midst of a deadly epidemic.

At the center of this tale is a young woman named Cordelia, but since she hates her name, she prefers to go by Red. She lives in a mixed-race family with her mother, father, and older brother Adam, whom she thinks is a pain in her ass. When she was younger, a car accident also caused Red to lose a leg, and so she uses a prosthetic for mobility. Growing up, she felt rather isolated and misunderstood because of her disability, which led her to immerse herself in movies, literature and other interests as a result.

And then the Crisis came. People started getting sick. The illness, which begins with an insidious cough, gradually causes worsening symptoms until the virus takes over the body, leading to a horrible and bloody choking death. There is no known cure, and only a small percentage of the population is immune. Within months, millions are dead, and civilization has pretty much collapsed. Armed with only the survival knowledge she has gleaned from pop culture and her own research, Red believes that her family’s survival rests on getting to her grandmother’s house, hundreds of miles away in rural country where there’s a chance the virus hasn’t taken root. The last thing she wants is to be rounded up and quarantined, because, duh, haven’t these idiot people in government ever watched outbreak movies? Being packed together like sardines in some facility while a highly infectious disease is running rampant is a bad idea, not to mention you can never trust the military in these situations, oh no.

So Red starts making plans for their family to stockpile supplies for their journey. But one day, despite taking every single precaution and being extra careful, one of them suddenly falls ill with a cough. Dreading what this means for their survival, Red is nonetheless determined to go through with the journey to grandma’s house, knowing that the threat of infection is just one of many dangers on the long road ahead.

Ultimately, I finished this book with some mixed feelings. Still, that isn’t to say I didn’t enjoy it, because I did—but in terms of the writing and storytelling, I just didn’t feel that The Girl in Red is of the same high caliber as her previous retellings. There was one major aspect that bothered me, and that was the protagonist herself. In case you couldn’t tell from some of the snarkiness in my earlier paragraphs, Red annoyed the hell out of me. She’s a belligerent, unpleasant little know-it-all who thinks watching a few movies makes her an expert on everything—smarter than even her professor parents! She’s also irritatingly self-righteous about it, and likes to lord it over everyone else. Granted, I get that she’s been through discrimination and rough times which could explain for some of her antagonistic behavior, but that still doesn’t fully justify the fact she could be highly judgmental and plain nasty herself, especially towards her own brother. Speaking of which, I didn’t get the impression that they were this closely-knit family like the narrative wanted me to believe; it seemed like everyone was simply too vapid and clueless to stand up to Red’s bossy demands. Red also didn’t feel genuine to me, coming across more like an idealized character that checks off all the right social justice boxes. I consider myself pretty middle-of-the-road so maybe that’s why stuff like this tends to leap out at me, and Henry isn’t exactly subtle when it comes to shoving issues like race and guns in your face, reminding you at every turn how Red feels about such things, and most of the time it’s done in a very awkward and ham-fisted way. Many authors have done better.

But now on to the things I did like: the story was fast-paced and compelling, and with the novel being on the shorter side, there really wasn’t any room for lulls. I also enjoyed the narrative structure as we alternated between the present and past, an effective way of building anticipation and dread as readers are left wondering what happened to Red’s family. As well, the modern and realistic apocalyptic setting was a nice change of pace from the usual fantasy fare by the author, though I think there were plenty of missed opportunities when it came to the survival aspect, which felt lacking. Maybe like Red, Christina Henry merely pulled her inspiration from a bunch of movies, because most of the situations our characters found themselves in were pretty clichéd and predictable. That said, there were some interesting—and disturbing—developments towards the end, as the plot crosses the line into speculative horror territory. I just wish the book could have given us more in this vein, as that would have definitely boosted its uniqueness and appeal.

All in all, I had a good time with The Girl in Red, though admitted many of the positive things about it were somewhat overshadowed by the gripes. It most definitely isn’t my favorite of Christina Henry’s dark fairy tale retellings, though I do appreciate her trying something a little different this time around.

← Mogsy’s Bookshelf Roundup: Stacking the Shelves & Recent Reads
Book Review: The Girl Who Could Move Sh*t With Her Mind by Jackson Ford →

26 Comments on “Book Review: The Girl in Red by Christina Henry”