YA Weekend: Wicked Saints by Emily A. Duncan 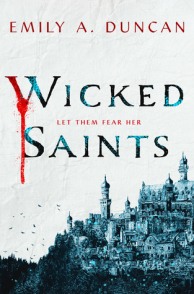 Wicked Saints by Emily A. Duncan

Series: Book 1 of Something Dark and Holy

With so much hype surrounding Wicked Saints before its release, I was glad I took the time to check out some of the more critical reviews before diving in. Doing so helped me prepare myself for the possibility that it might not be everything I had expected, and there were also a few things frequently mentioned by reviewers that I thought might cause me some issues as well. Turns out, they were right. While I don’t actually regret my time with this book (it had its saving graces), I can’t say I was engaged much with it either.

Set in a fantasy world which draws much of its inspiration from Slavic culture and history, Wicked Saints splits its focus between three main protagonists: Nadya, a Kalyazi cleric raised in a monastery and trained to commune with the gods; Serefin, a High Prince of Tranavia who is also a blood mage; and Malachaisz, a rogue Tranavian mage who has defected against his own people. Nadya has spent her life hidden away in the remote mountains, Kalyazin’s secret weapon to use against Tranavia in the religious war between the two nations. However, before her time could come, the monastery that has been a safe haven to her for her whole life is suddenly attacked by Tranvaian forces led by Prince Serefin.

Fortunately, Nadya was able to escape, evading capture by falling in with a group of rebels. Meanwhile, Serefin is forced to abandon the search for the cleric when he is unexpected called back home by his father. Nadya is relatively safe again for now, but for how long? The resistance fighters are determined to take their cause all the way to the palace, where they plan on assassinating the king to put an end to the violence once and for all. Despite herself, Nadya also finds herself drawn to Malachiasz, the gorgeous blood mage who embodies everything she has been taught to hate and fear in her devout upbringing by the monastery priests. Every character seems to have an agenda of their own, each of them grinding against the others like rusty gears while none of them have a choice but to go along with the tide of the times. However, inevitably when the centuries of bad blood and brutal conflict come to a head, there will undoubtedly be consequences for them all.

First, let’s start with what I liked. Admittedly, this isn’t a long list, but what’s there is significant and goes a long way in making up for a lot of the issues in the book. Number one is the atmosphere. Wicked Saints is a gothic fantasy novel and that’s obvious enough; you can practically feel its dark and broody vibes wafting off the pages like some cheap perfume. No, it’s not subtle. One might even say it’s a bit overdone, that this novel is “gothic” in the way a preteen would interpret the word—nihilistic themes, blood magic and death gods, bad boys and bad girls in black edgy clothing, etc. And yet, despite the prose dripping with angst, Emily A. Duncan’s writing is fantastic, which brings me to the second thing I liked most about this book. The author clearly has way with words, and I found her style perfectly suited to creating this gritty world full of richly decadent details.

And now for the things that didn’t work so well for me. As much as I enjoyed Duncan’s writing, it pains me to say that the very nature of it prevented me from connecting with her story and characters. While the prose may be well-crafted, I wouldn’t exactly call it easy on the eyes. In some ways, I feel like the writing may have placed too much emphasis on artistry while sacrificing readability and overall engagement. The plot was decent, but slow, and none of the character POVs managed to excite me long enough to keep the momentum going. Which brings me to the characters. I didn’t like them, nor did I dislike them. They were just there—and it was this ambivalence towards everyone in the book that frustrated me to no end. Make me love your characters or make me hate them—I don’t care. Just make me feel something, anything! The fact that I couldn’t relate in any way to the characters left me with an overall sense of ennui and coldness, and I think this was what resulted in the emotion disconnect I had with the novel.

So yes, I struggled, even though I’d be hard-pressed to point out anything that was seriously flawed about this book. In fact, despite experiencing problems early on, I still knew that deep inside I wanted to see the story through to the end. The problem though, was the incredibly difficult time I had motivating myself to pick up the book again, and in the end, what finally did it was borrowing the audiobook from the library and finishing it in another, more convenient format. It just goes to show, some books and I are simply on different wavelengths, making it hard for us to jive. I believe this was the case with Wicked Saints, which sadly proved not to be my cup of tea after all, but I’m sure it will find lots of love with others.

← Friday Face-Off: Blue
YA Weekend Audio: The Tiger at Midnight by Swati Teerdhala →

37 Comments on “YA Weekend: Wicked Saints by Emily A. Duncan”