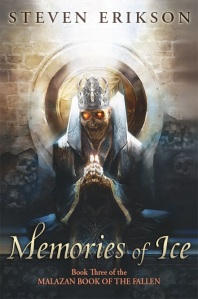 Memories of Ice by Steven Erikson

Series: Malazan Book of the Fallen #3

“War has its necessities…and I have always understood that. Always known the cost. But, this day, by my own hand, I have realized something else. War is not a natural state. It is an imposition, and a damned unhealthy one. With its rules, we willingly yield our humanity. Speak not of just causes, worthy goals. We are takers of life.”

When I first stepped into the Malazan Book of the Fallen series, I had no idea what I was really getting into. When I finished that first book, Gardens of the Moon, I had no idea what I had just left behind. All I knew was that I loved Erikson’s writing and was fascinated by the myriad of unique characters.

Prompted by the high praise for the entire series, I dug a little deeper to discover that the Malazan series is the epic dream child of Erikson and Ian Cameron Esslemont, fellow gamers who created this world as part of their GURPS roleplaying campaign. The series holds fast with its four and five-star reviews across almost 20 books–a testament to the authors’ dedication and creativity. That kind of writing deserves some attention, especially when far more mediocre series garner undeserving accolades.

Last year I read the second book, Deadhouse Gates, and though I did not enjoy it quite as much due to several of the characters, I knew that characters I did care about would be back soon enough and I’d learn more and more about this world as the tapestry weaved itself together. I was not at all wrong. Listening to Ralph Lister expertly navigate so many voices was a highlight of my long commutes this past month, and several times I found myself flailing over amazing scenes in the middle of traffic.

This book brings together the armies of the previous two books. Once enemies, they have formed an uneasy alliance in order to face a far greater threat. No, not the Night King. The Pannion Domin empire threatens to devour all, and the Crippled God’s poisonous quest for revenge is seeping into the world. He remains in chains, but how long will that last?

This series is world building at its finest. Many authors I have read try and fail to comprehend the commitment necessary to truly achieve this. Some go overboard, interjecting too much detail inorganically (looking at you, Sanderson), while others skimp on details and cheat by simply excusing everything with “magic” (looking at you, GRRM). No doubt Erikson and Esslemont’s roleplaying experience gave them a significant advantage, and they use their experience to the fullest. While their settings may be a bit generic, they fill in their worlds with rich cultures and characters, and demographics that cover all sorts of pantheons. Gods and humans and undead and others sweep across the pages in all their glory.

In my Malazan exploration, I have also come to appreciate Erikson’s sense of humour even more. While I found his Willful Child science fiction satire to be a bit too much of a good thing, I am quite fond of the way he sharply interjects his wit into scenes that are anything but happy. And then there’s Kruppe, the portly man who is more than he seems, speaking in third person and knowing far more than he should. I hear Ralph Lister no longer narrates this series after the third book. I am going to judge the next narrator very harshly based on his version of Kruppe.

Admittedly, I still find myself somewhat confused by the overall motivations of the Pannion Domin and the political tides of the book. As such, I have spent some time in the Malazan wiki. I don’t count this as a flaw of the writing though. The first book took a huge risk in dumping the reader into the middle of a battle and then demands that we keep up and learn along the way as the information is parceled out and relationships develop. My mind tends to wander here and there, so it’s my own fault for missing a detail or 30. Still, as I said with the first book, the writing is superb, and the characters are almost all so enthralling that I have very much become invested in their intertwined fates.

10 Comments on “Audiobook Review: Memories of Ice by Steven Erikson” 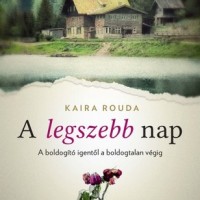 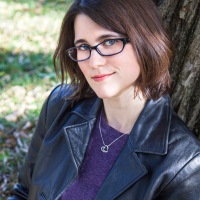