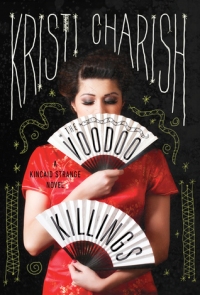 The Voodoo Killings by Kristi Charish

I want to say right off the bat, this was the most fun I’ve had with an urban fantasy in ages! Not only was I blown away by the potential—the most I’ve seen when it comes to a new series—Kristi Charish appears to have this uncanny ability to push all my right buttons. I became a fan of hers after the Adventures of Owl, and I’ve been hankering for anything she writes ever since. That’s how this first book of her new series came to my attention. Hard to imagine anything beating a fast-talking, tomb-raiding, RPG-playing ex-archaeology grad student turned international antiquities thief, but Kincaid Strange of The Voodoo Killings might actually give Owl a run for her money.

For one thing, she’s not your typical voodoo practitioner, nor is this book your typical ghosts-and-zombies fare. However, like a lot of her peers in the UF genre, Kincaid is flat broke. And while she might be the best at what she does, what she does best isn’t exactly paying the bills these days. New Seattle laws against the raising of zombies have dried up her source of income, leaving her scrounging for séance jobs among the city’s population of university students, especially those with an obsession with grunge rock. It helps a little that the ghost of Nate Cade, the legendary Seattle grunge rocker who died in the late 90s, is her roommate. The two of them make a great team.

Then one day, Kincaid gets a call about the stray zombie of prominent local artist, and before she knows it, she’s his brand new guardian. Cameron can’t remember who raised him or even how he died, but an unauthorized zombie walking around town spells very bad news for everyone, so Kincaid takes it upon herself to help him piece together the final days of his life. The investigations go south when she connects Cameron’s death to a string of recent murders, and the victims are all zombies and other voodoo practitioners like her—which can only mean one thing: it’s only a matter of time before the killer comes gunning for her.

As I said, The Voodoo Killings is not your typical UF. The world Kristi Charish has crafted here is all her own, and I love what she’s done with the magic and mythos behind the raising of zombies and summoning of ghosts. There’s an intricate process behind animating a corpse involving a complex series of spell threads that only someone with the skills can recognize and manipulate. A practitioner’s relationship with the “Otherside” is one of the most fascinating aspects of the story, hooking me in right from the very start. It’s also the wild little details that make me want to giggle and rub my hands together with glee, like the practice of writing on mirrors to communicate with ghosts, or Cameron having to pan-fry his servings of human brains that come neatly packaged in highly illegal (but highly convenient!) vacuum-sealed packets.

The characters themselves are instant favorites. There’s a special place in my heart reserved for all the underdogs of UF, and Kincaid definitely counts. In truth she actually shares a lot of traits with Owl from Charish’s other series, save for the recklessness and smart-alecky mouth, which made connecting with Kincaid a lot faster and easier. Like Owl again, Kincaid has few human friends and spends the bulk of her time associating with other practitioners and supernatural beings, and as a result we have a fascinating and very diverse cast of supporting characters. First and foremost is Nate, who is in no way your everyday sidekick ghost, though his loyalty to Kincaid is unequaled. Then there’s Lee Ling, the centuries old mysterious zombie who runs a tavern in the magical underground and who will keep you guessing at her motives at every turn. And last but not least, there’s Cameron, the stray zombie Kincaid so reluctantly took under her wing. Throw everything you think you know about zombies out the window, because he will make you see them in a whole new light.

The plot is also fast-paced there’s never a dull moment. This story hits the ground running and not once do we hit a lull. Kincaid Strange appears to belong to the same school of UF protagonists as Harry Dresden, where the heroes and heroines must handle the challenges of juggling a million crises at once while multiple fires around them keep screaming to be put out. Still, while there may be a lot of things going on in this book, I didn’t actually find any of it to be too much or overwhelming. All it did was make it hard to stop reading.

While I still love Owl and her Indiana Jane persona, Kincaid really appealed to me in her own unique way. Whenever I read urban fantasy, it’s not uncommon for a new series to take several installments—two, three, sometimes even four books—for the characters and world to draw me in. Rarely does it happen with the very first book, but that’s exactly what happened here with The Voodoo Killings. If you’re a fan of the genre, I can’t recommend this one highly enough! Hands down, this is my favorite book by Kristi Charish right now, and to my happy surprise, I think I’ve also found a new favorite urban fantasy series.

23 Comments on “Book Review: The Voodoo Killings by Kristi Charish”