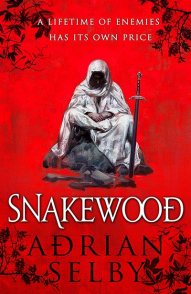 It has been ten years since the mercenary group known as Kailen’s Twenty broke up and went their separate ways. But now, some of its members are rallying to their leader again, drawn together by an assassin who has been methodically hunting each and every one of them down. Always, a black coin is found somewhere on the murdered corpse—a symbol of betrayal.

As Gant and Shale race to warn the others, neither of them have an idea of why a killer might be after them. Goodness knows Kailen’s Twenty has done some terrible things in their time, but they have always honored a contract. So what could have precipitated this sudden string of vengeance and violence? The answer lies somewhere in the past, as the pieces of the puzzle fall into the place to reveal the truth behind a mysterious event that happened all those years ago, in a place called Snakewood.

I’ll give Snakewood this: it has a very unique premise and one of the coolest like-magic-but-not-really-magic systems I’ve ever seen, which I’ll most definitely rave more about in a bit. That said, I feel like I have a lot of good things I want to say about this book, but almost all of them come with caveats. For example, as much as I love being thrown straight into the action, there were also sections of the book (especially in the beginning) that proved very confusing and difficult to follow, and while the good news is that the confusion eventually lifts, I also fear it may come too late for some.

Part of the issue stems from the structure of the story, which is made up of a series of accounts gathered by a chronicler named Goran. As a result, the narrative is non-linear, told retrospectively, and also subject to frequent point-of-view switching. It’s an interesting style of storytelling, which in turn has its downsides, namely a disorganized introduction and uneven pacing. For instance, we kick things off with an account by Gant, one of the surviving mercenaries of Kailen’s Twenty. His narrative is told from the perspective of someone who clearly assumes that whoever is reading this book already knows all the terminology, people, and places he’s talking about. His way of speaking is also very rough, peppered with brew jargon and grammatical errors, which in itself is a double-edged sword, making Gant’s voice seem very genuine and “in character” while also making it hard to tease out what he’s trying to say.

It makes me think that Snakewood would have been well served with a glossary. A handy list of brews, plants, and their effects would have been helpful as well, given the mercenaries’ heavy reliance on them. One of the biggest problems I had with the beginning was how jumbled everything felt simply because so much was given to me without context or explanation, and keeping track of the large number of different characters also made getting through the intro difficult. Things didn’t smooth out until well after the quarter way mark, which works out to more than a hundred pages.

Fact of the matter is, the experience improves by leaps and bounds after this point, but a fair amount of investment is required, and that may be a deal breaker for some readers. Personally, I’m happy I decided to stick it out, because once I got into the meat of the story, I found I started to enjoy it more and more. One of POVs ultimately emerged as my favorite, and surprisingly, it was that of the mysterious assassin. “Sand”, as he is first called, captivated me because of the depth of his character. He is by no means a good person, being a sadistic killer and alchemical master who gives no thought to the victims of his experiments. And yet, there’s also something to be admired about his commitment and loyalty to those he has sworn to protect. Some part of me also rooted for him because of the underhanded way he was betrayed, and it was sickening the horrors he had to live through because of that betrayal. This is definitely a story in which the antagonist—if that is indeed what Sand is—beats out everyone else for being most fleshed out and fascinating.

Finally, I loved the concept of fight brews. It looks and sounds a lot like magic, but in truth, it’s chemistry. Snakewood takes place in a world that values plants and reagents because of their effects, with new recipes always high in demand and those who can create them held in reverence. Alchemical mixtures can come in many forms, like powders, pastes, potions, vapors, and more. They can also be used to heal or to harm. Mercenaries employ brews as weapons, incapacitating their enemies with hallucinogens, or killing them outright with poisons. They also use brews to enhance their abilities, like a certain kind of leaf dissolved under the eyelids might give one eagle-sight, or a quaff of a potion might make you stronger, faster and more agile. However, there’s also a terrible physiological cost to using brews, called “paying the color”. Some mercenaries are literally marked for life, their skin color or texture permanently altered by whatever they ingested. And like a drug, coming off the high from a brew can also give you one hell of a crash, and some brews are so addictive that those who use them become trapped in this vicious cycle, leading to ugly results.

Ultimately, I’m glad that I read Snakewood. Granted, the first quarter of it was rough going, but I liked the rest of it a lot, and if there’s a sequel I would pick it up in a heartbeat. The non-linear, “jumping around” style of the storytelling and inconsistent pacing are the book’s main weaknesses, along with the difficult-to-read narrative. But if you can make it past the intro and get used to the unconventional voice used by some of the characters, you might just find plenty to admire about this uniquely dark and gritty fantasy. An intriguing debut.