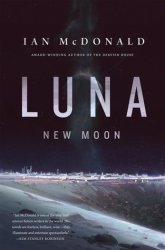 If you can imagine the Starks and Lannisters as two rival families with competing mining operations on the moon, I daresay the situation might look a lot like the plot of Luna: New Moon. I can’t remember the last time I read a sci-fi novel featuring a richer and more compelling premise, and I am also amazed that the characters are all so developed and well-defined.  Where do I even begin when it comes to the many things I loved about this book?

First, the story. The sheer scope of it is simply ridiculous, with a multi-perspective narrative following more than half a dozen characters from three generations of a powerful family. At the center of it all is the matriarch Adriana Corta, who arrived on the moon many years ago and built Corta Hélio, a company and a dynasty. Through her successes, the Cortas became the fifth “Dragon”, joining four other lunar families in the control of the moon’s trade—the Mackenzies, the Vorontsovs, the Suns, and the Asamoahs.

Of course, not all were happy with the Cortas’ rise to power. It’s like the mafia, and everyone knows what happens when a new player enters the fold. As expected, several rivalries immediately developed but none were as bitter as the one that sprung up between the Cortas and the Mackenzies. Cortas cut—hard, sharp and fast. But the Mackenzies will always pay back three times. No peace has ever existed between the two families, despite all the political marriages and attempts to reconcile.

Next, you have the setting. You’re as likely to die from the harsh conditions of the moon as you are from a rival assassin’s blade. On the moon, the Four Elementals are king: Air, Water, Carbon and Data. Without these basic commodities of lunar existence, you are nothing. If you run low on funds to pay for them, then you’d better learn to breathe less.

The only law on the moon is that there is no law—everything is negotiable. For the families of the five Dragons, this means a lot of power…and a lot of danger. However, the Cortas have another saying: Family first, family always. No matter what, Corta Hélio takes care of its own. And since it is your only protection on the moon and the only thing you can count on to keep you alive, so too must everything be done with the family company in mind.

Which brings me to the characters. Adriana Corta has five children, and they in turn have their own spouses and children, so we’re talking about a HUGE cast of characters. And that’s not even counting the members of the other four families or the various important figures in lunar society. Thankfully, other than Adriana herself, the narrative mostly focuses on her children (Rafa, Lucas, Ariel, Carlinhos, Wagner) and her grandchildren (Lucasinho, Robson, Luna). Occasionally there are also parts of the story told through the eyes of Marina Calzaghe, a surface worker newly arrived on the moon who gets entangled with the Cortas and their politics.

I won’t lie, things were very confusing, especially at the beginning. There was so much going on and a whole village’s worth of characters involved, I found myself constantly referring to the Character List until I was comfortable with the names and all the relationships. But once I got that down, I was completely addicted to this book! The story is intensely powerful, with a plot filled with political scheming and Machiavellian designs. There’s also a strong focus on the characters. I feel like I got the chance to know each Corta on a deep and personal level, an amazing achievement considering how often we bounced around between perspectives. Adriana also stood out with her first-person chapters. She’s an amazing character, a woman who conquered her fear, heartbreak, and the unforgiving landscape of the moon itself.

Finally, the writing. Ian McDonald struck the perfect balance between all the various elements in this story. He tackled a very complicated idea but still managed to make it very easy to understand and enjoy. He also handled difficult themes well. Luna: New Moon wasn’t my first book by McDonald, but all I’d read before this were the novels of his Young Adult series, Everness. His Adult fiction is very different from his YA, but I love his style regardless.

If you’re a sci-fi fan looking for a character-driven story with complexity, scope and depth, then do yourself a favor and check out Luna: New Moon. This book sucked me in completely and left me hungry for more. I can’t wait for the next volume in this two-part series.