Full Disclosure: A review copy of this book and audiobook was provided to me by the publishers. I would like to thank the author and the publishers for providing me this opportunity. All opinions expressed from here forward are my own.

This story starts when Zell (Rapunzel) unexpectedly leaves her friends to move to the “boonies” (Oz) to run a unicorn farm with her husband Jason and her twins. Zell’s circle of friends consist of the prim and proper Rory (Briar Rose/Sleeping Beauty), the foul-mouthed and cynical Bianca (Snow White) and the levelheaded CeCi (Cinderella). The inhabitants of fairy tale land know that they’re supposed to live out their pages to their happily ever after. On top of that, they are aware of the “outside” world, which is where normal humans live, humans who supposedly give power to their pages through their belief, which supposedly makes it even more important that they act a certain way. Zell, Rory, and CeCi have all achieved their happily ever after, even though it seems they still long for something more. Bianca is still getting to her happily ever after and is slated to be married to a kindly prince she doesn’t love. With Zell’s sudden departure, her friends find themselves in a sudden flux as they begin to rebel against their stories and start to find themselves. This book is told through a series of letters from each woman to Zell as they go from the pain of dealing with her departure to creating a happily ever after on their own terms.

Imaginative retellings are one of my favorite types of story because I love seeing how authors reimagine old characters and old stories, and this book was on one of my recent Top Ten Tuesdays of books that I was looking forward to listening to/reading this year. This story was like a fairy tale version of Real Housewives. Zell apparently met her prince while he was roaming the woods blind and she was pregnant with twins. She restored his eyesight and they married. You don’t learn too much about Zell other than little tidbits of her story, which was disappointing. Rory is married to a prince who doesn’t care for her much. She tries to be perfect and tell herself that loves comes eventually, even though she loved someone else before marrying her prince. She’s one of those women who tries to act like everything is beautiful while inwardly falling apart. CeCi has a great relationship with her prince. They truly love one another, but she’s starting to feel they’re beginning to drift in two different directions. The things she loves to do (cooking) she has to hide from him because he said that part of her fairy tale is over and she’s no longer a servant. However, she wants to do this because she loves it, and she wants to share this love with him. And then there’s Bianca… Oh, Bianca… 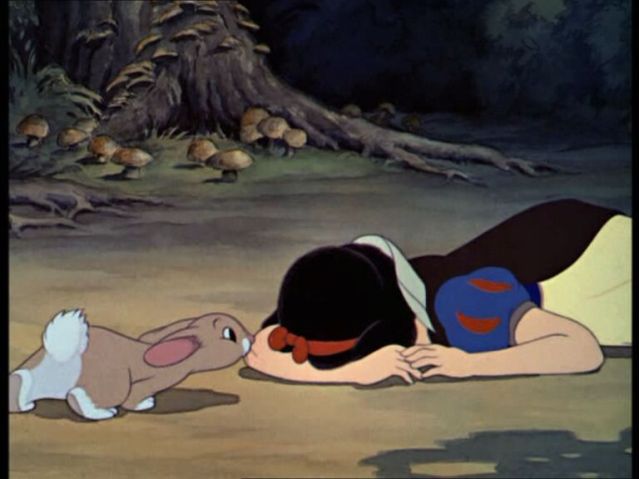 … we get Bianca who doesn’t take anyone’s shit, who’s cynical about love and the role women play in these stories, who admits that she’s sexually attracted to women and men and gratuitously uses the word “fuck.”

Yeah, this Snow White is who we get, but with less tattoos. (But I think she’d totally get the tattoos if she thought she could get away with it.) Bianca argues: “It’s irresponsible storytelling. Love can certainly include the occasional experimental romp in handkerchiefs or a playful smack on the behind with a riding crop, but it doesn’t involve isolation and belittlement. Star is already worthy of Sabian. What does she have to reinvent herself for?”  Despite Snow White’s general curmudgeonly attitude, she does have a gentle heart. While she despises what her stepmother put her through, she has no desire to exact revenge and isn’t looking forward to having to possibly execute her in her happily ever after. She doesn’t blame her father, who loves to travel, for not being around to protect her. She petitions the powers to allow Huntsman to return from exile because she believes that he did the only thing he could considering the circumstances. She has no desire to marry the prince she’s fated, too, even though she lauds his great qualities and believes him to be a great man and a good friend to her. She doesn’t want what the pages tell her is her happily ever after.  She wants to create her own. They all want to create their own. They want to be the narrators of their own stories.

A few complaints I do have is that the letter writing format can be a little jarring and disjointed. Sometimes, it’s too much like being a “chaptered” story where one letters is just really a continuation of the last letter’s story. Some of the moments that were so important to the characters were glossed over in their letters. Also, certain letters can get a little tiresome, even repetitive, especially Rory’s whose letters have to continuously be a “Everything is fine” mantra, even though I understand why they’d be like that. Sometimes, this book felt like it was going into young adult territory with some of the dialogue and scenarios. I’ll also concede that sometimes it’s hard to get to the meat of their issues with the way they complain. Like wanting to write Bianca off as just a catty witch instead of seeing the woman who wants to just be and leave this vengeance thing behind. These type of things can take readers out of the story.

However, don’t think this is a serious read. While there are certainly serious themes here, this book is infused with humor. While some of it made me smile, I won’t say it was laugh out loud funny. Some of the jokes were a little corny, but the narrator, Amy McFadden, caught the varying tones of the princesses well. Rory’s voice was whimsical and dream like. CeCi’s voice was conversational and levelheaded. Bianca’s voice was tough and unladylike. She didn’t do a great job with male voices, but readers should take care to remember she’s reading these letters in the tone of the princesses, so it makes sense the male voices wouldn’t be that great. She’s creating a semblance of a male voice as the princess would. These princesses are catty, cordial, selfish, selfless–in other words they’re very flawed as any person. They complain, they whine. But if you look through their words you can see more shaping up. If stories that turn your favorite princess into less that some self-sacrificing damsel upsets you, turn away from this book. This was one of the more fun retellings I’ve read, but this absolutely won’t be for everyone. I’d rate this between 3 and 3.5 stars, but I am feeling generous because I liked some of the themes. With that being said, I’ll leave you with this quote from Snow White:

“We’re all at risk of becoming imprisoned within our own mirrors. By our expectations of ourselves. We are vain or unkempt, bitches or sycophants, mothers or monsters, queens or servants.”

7 Comments on “Audiobook Review: Letters to Zell by Camille Griep”