Sword of the North by Luke Scull: Guest Review by Mihir Wanchoo

Today’s review is brought to you by Mihir Wanchoo, a reviewer from Fantasy Book Critic. This was really exciting for me. FBC was one of my favorite SFF review sites even before I started reviewing, so I was pleased and so honored when Mihir had this great idea and invited me to do a “guest review swap” with them of Luke Scull’s Sword of the North. Of course I agreed! Please enjoy Mihir’s review below, and you can also read my guest review of the book which was posted yesterday on Fantasy Book Critic by going here! 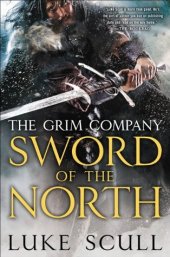 Sword of the North by Luke Scull

Series: Book 2 of The Grim Company

OVERVIEW/ANALYSIS: When it comes to sequels, it’s hard for the authors to write them, as often they have to do so within a strict time limit as well as take into consideration reader expectations. Now imagine if your debut was a successful one, Terry Brooks took 5 years between his debut Sword of Shannara and the follow-up Elfstones of Shannara. Supposedly he had written a different book but his editor had him scrap it, and aren’t we all glad for it.

If Terry Brooks had such a hard time writing the sequel in a day and age without the internet, imagine what authors must go through in this age. Luke Scull had previously mentioned how he’s had to overcome many difficulties while writing this book and it’s being released nearly 2 years after its predecessor. As far as wait times go, that’s a tiny one in epic fantasy scale. For me The Grim Company was a standout debut and also the best debut in my 2013 year-end lists. The sequel was a highly anticipated one and of course this volume promised a lot more of Brodar Kayne & his highly taciturn comrade Jerek the wolf.

How did it figure? That’s a complicated answer and I’ll try my best to give a proper reply. Here’s what the novel is about. Broday Kayne and Jerek after the events of The Grim Company when they took part in upsetting Salazar’s reign aren’t really feeling the love. So after three weeks they decide to go back to the north. However, their luck runs awry when bandits beset them. This book also dwells deeply on its titular character Kayne as we get to see how Brodar gained the title of the Sword Of The North beginning with events nearly thirty-six years ago.

Returning back from the last book are Davarus, Sasha and Yllandris. Davarus returns and finds that fate has crueler plans for him. He finds himself a prisoner in a concentration camp (of sorts) with a sadistic overseer. Sasha found her family in Ambryl but she finds that the sister she remembers is long gone. They are both conscripted by Eremul to find out more about the White Lady in Thelessa while delivering his message.  Yllandris is in a rough situation as well, her paramour is now a tortured prisoner and she is beholden to a crazy sociopath who is known as the Butcher King.  Lastly there’s Eremul who is now recognized as the half-mage who slew Salazar and is now trying his best to find out more about the Fade. There’s also a new POV character called Sir Meredith who is a knight sworn to the Butcher king and he’s a doozy.

That is the cast of POV characters and with this book, Luke Scull plunges the reader back into the crazy world that is the Age of Ruin. The characters whom we love are back however the author is not done with them. Readers should be warned that while this is a middle book of the trilogy, it doesn’t quite suffer from the middle book syndrome. There’s a plan at work here, which deals with the events that were showcased in the prologue of its predecessor. This book does build up on a lot of things for Dead Man’s Steel, the final volume of the trilogy.

Here’s what I enjoyed about this book, once again the characterization is the author’s forte. Beginning with Brodar Kayne who shines mightily throughout, there’s also the focus on Davarus, Yllandris, Sasha and Sir Meredith. All these characters undergo a lot and not all of them make it throughout the book. I want to particularly highlight Sir Meredith who is as despicable as they come but thanks to the author we get to see a peek at the madness that lies within him. It’s a fascinating sort of look that while we hate the character and his actions, the author brilliantly illustrates what make him tick. This brilliant characterization is also showcased with Davarus and Sasha who have to undergo a lot of trials and they are made stronger for it.

If you thought Davarus was pompous in the previous chapter, this book showcases how far he falls. The horror he endures makes the stuff Harry Dresden faces seem like a walk in the park. In this regard, Luke Scull shows himself to be a crueler manipulator than Jim Butcher with regards to his characters. We also get a significant look into Brodar’s past and how his friendship with Jerek came to be. That bond is significantly focused upon in this volume and we are shown what truly makes Jerek tick. The author also shows a lot of ruthlessness with character deaths and there are some surprising ones in this volume. I enjoyed how the author made the read an even keel, as I wasn’t sure who would survive for the next volume.

Lastly this book also gives us a more than clearer look at the events that lead to the Age of Ruin, the reason for the Fade’s disappearance and hatred for humanity. The author has sown some seeds within the first volume that will become clearer only after reading this book. I absolutely can’t wait to see how it all unfolds in the third volume wherein there’s a titanic struggle to for the remaining characters.

As intriguing as this book was, there were some middling points to it. Namely that the pace flounders a bit in the middle of the book wherein the author is setting up things for the climax. Another thing that was disappointing for me was the reduced role that Eremul had in this book. As a main character in the preceding volume, I was looking to more from him but sadly that wasn’t the case. However I’m hoping he features more prominently in the sequel though.

CONCLUSION: Sword Of The North is a strong sequel to The Grim Company and as far as books go, it’s a fascinating read. I had high expectations and it managed to meet them strongly. It did have some missteps but then what book doesn’t. Overall it neatly sidestepped the middle book syndrome and sets up the final volume superbly. Sword Of The North gets a solid thumbs-up and I can’t wait to read Dead Man’s Steel now.

ABOUT OUR GUEST REVIEWER

Mihir is also a diehard fan of the Indian Cricket team and  Chelsea Football Club. Mihir currently lives in Buffalo with his patient and loving wife, and is ever looking forward to discovering new authors and old books.
You can find out more about Mihir at Fantasy Book Critic, FBC’s Facebook page as well as their Twitter page.

9 Comments on “Sword of the North by Luke Scull: Guest Review by Mihir Wanchoo”