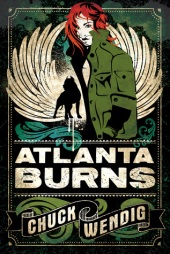 Atlanta Burns is the kind of book that takes time to percolate; after finishing the last page it had me feeling all discombobulated and I needed time to think on it for a bit. If you’re familiar with Chuck Wendig’s work then you’ll have some idea of what I’m talking about. Never let it be said that the guy ever holds his punches when he tells his stories, and you can be sure this is not your run-of-the-mill Young Adult fare.

The book’s protagonist Atlanta Burns is a high school student who no one wants to mess with. But she’s been through some traumatic stuff, and her reputation came at a high cost. However, Atlanta’s not going to let what happened to her stop her from doing the right thing, and she’s definitely not one to stand by while bullies prey on the weak and the defenseless. There are some terrible people in this world, and armed with her shotgun and the moxie to match, Atlanta is going to do whatever it takes to stop them.

Two stories make up this book, “Shotgun Gravy” and “Bait Dog”. Both are powerful, yet not easy to read. In the first, Atlanta and her new friends go up against Neo-Nazis, crooked cops and bigoted bullies. The second story sees her attempting to break up a dog fighting ring and deals with the themes of animal cruelty and abuse. Atlanta’s world is a bleak and brutal place to be, and reading about things like lynching, sexual assault, tortured puppies, kids being burned with cigarettes and such, it’s hard not to get through this book without thinking, wow, people SUCK. It made me sick sometimes, it really did.

But works like these also have a place in YA fiction. Like this quote in the book says: “Life is equal parts strange and beautiful and horrible, and we’re tossed into it without a map or an instruction guide. Poems and stories have a way of helping us make sense of things.” And that’s how I see these stories in Atlanta Burns. It might not be pleasant and it might not be comfortable, but it’s important to face some of these issues head-on and not soften the blow because it’s true – one can argue that Wendig is painting things too dark but the sad reality is the things in this book do happen, and it would be a mistake to pretend they don’t. Atlanta Burns is a book that explores difficult subject matters, and exposes them in all its ugliness so that we as readers can process it, make sense of it for ourselves.

Wendig has a message here. It’s not so surprising that he went with the Neo-Nazis as his main baddies, though this book is peppered with a lot of despicable scum-baggy types as a whole. Thing is, in any slice of society you look at there’s bound to be good folks and bad folks, but in Atlanta Burns there seems to be an overrepresentation of the bad, and if I’m to be honest, even Atlanta herself is not entirely likeable. To Wendig’s credit though, he does attempt to shine a light in the dark of this whole “things don’t get better” bleakness. In this world of bigots, bullies and corrupt cops are characters like Mrs. Lewis, Steve AKA “Chomp-Chomp” or Detective Holger who show Atlanta that things can be different.

This was a wonderful read. However, I would be remiss if I didn’t warn you against some of the shocking, horrible things that are in this book. It’s categorized as Young Adult, but definitely not typical of the genre. Calling Atlanta Burns a dark book is an understatement; it deals with some very mature themes, and even some adults may find parts of it difficult to read especially if they are sensitive to those particular subjects. I really enjoyed this book, but as always with Chuck Wendig, reader discretion is advised.

A review copy of this book was provided to me by the publisher via NetGalley in exchange for an honest review. Any quotes contained above are from the advance copy and are subject to change. My thanks to Skyscape/Amazon Children’s Publishing!