Book Review: The Providence of Fire by Brian Staveley 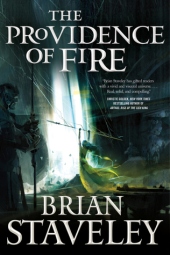 The Providence of Fire by Brian Staveley

Series: Book 2 of Chronicle of the Unhewn Throne

You can always tell when I really like a book by how fast I devour it. I gave myself plenty of time to read Brian Staveley’s The Providence of Fire, anticipating it would take me at least a week or more to finish this huge honking tome of a novel, but it turned out I made short work of it, chomping through 600+ pages of this in a little more than three days.

I just loved this book, couldn’t put it down. This incredible sequel to The Emperor’s Blades was everything I hoped for – bigger and better in every way. In fact, I went back to my review of the first book and practically everything I had an issue with there was amended in this second installment. As a reader, you just can’t ask for more than that.

The Providence of Fire picks up where The Emperor’s Blades left off, following the diverging paths of the slain Emperor Sanlitun’s three surviving children. After spending many years training with the empire’s elite Kettral forces, youngest brother Valyn is in the position to safeguard his older brother Kaden’s succession to the Unhewn Throne – though now he and his wing members are labeled renegades and traitors. Kaden himself has his own destiny to follow. He has spent the last eight years sequestered in a remote monastery in the mountains, learning the mysteries of the monks who live there. With the help of his mentor Tan, Kaden is now ready to use all that knowledge to uncover the truth of those behind Sanlitun’s murder, but being his father’s rightful heir makes him the target of those who want to overthrow the Malkeenian line.

However, oldest sister Adare, whom as you may recall spent most of the last book languishing in the capital being manipulated and treated with disdain by palace flunkies, is probably the one to see the greatest change to her character and storyline out of all of them. Having learned the identity of her father’s assassin, Adare formulates a plan to escape the city in the hopes of removing herself from the enemy’s grasp. Not knowing what has become of her brothers, she is also determined to find allies to secure the throne and keep Sanlitun’s killer from ever taking it.

Adare was my absolute favorite in this book, and I enjoyed her chapters the most. This young woman who has spent her whole life within the walls of the Dawn Palace is not as helpless as you would think she’d be. She may be ignorant of much of the world, but her quick thinking allows her to get quite far in her quest, and I always love to see a female character with brains and ambition. I also have to say, she has the most entertaining companions – just wait until you meet Lehav, Oshi, and the indomitable Nira. In this sequel, Adare is a far cry from who she was back in The Emperor’s Blades, and as one of my biggest criticism in that book was the underrepresentation of her character, I am happy and amazed at how far she has come now. I like Adare’s character very much, not only because I think she’s the strongest and most level-headed of Sanlitun’s children, but also because I had a feeling deep down that Staveley would have great things in store for her. I’m thrilled to see she’s finally getting her moment in the spotlight.

The other gripe I had about the first book was that for an epic fantasy, the story just didn’t feel quite big enough. Kaden’s everyday life seemed to revolve being beaten silly by the monks, and for Valyn it was being beaten silly by his trainers and other rival wings. Adare hardly appeared at all. Well, no problems with any of that here. Whereas in The Emperor’s Blades our settings were mostly restricted to the mountain monastery for Kaden, the Kettral training island for Valyn, and the Dawn Palace for Adare, The Providence of Fire opens the world right up as all three royal siblings travel far and wide on their quests. And rather than dealing with their immediate personal problems, the conflicts they face in this novel are far more urgent and significant as well, with far-reaching consequences for the whole empire and not just our three main protagonists.

With a major war against a new threat on the horizon, the siblings’ roles in it make for a much more dynamic, fast-paced and action-filled plot. It is also worth noting that Staveley adds another point-of-view character partway through the novel, giving us insight into the motivations and actions of Gwenna, the demolitions specialist in Valyn’s wing. With the boys sent off on a wild goose chase and Valyn losing control of his team, it is up to the female Kettrals (and a Skullsworn assassin who is practically an honorary member) to take care of things. Though Gwenna’s chapters came in later in the second half of the novel, they were one of the highlights of this book for me and there were some very memorable scenes in them.

I’m now more intrigued than ever about where this series will go. I admit the plot became more addicting when Adare, Kaden and Valyn were all unaware of the fates of the others, so each sibling had to act on their own using what information they had available. As a result, Adare, Kaden and Valyn now each have their own individual goals. None of them are all that noble or perfect when it comes to making the tough decisions; I found myself dismayed as often as I was proud of some of their choices, but that is to be expected given the circumstances. I’m actually glad that they each have their strengths and shortcomings.

As such, the relationship between the three siblings also fascinates me. Sanlitun was no doubt a great emperor and a wise leader, setting his children off on very different paths for them to experience new things and widen their worldview. But doing so also left huge gaps in their knowledge. Adare knows very little about the outside world but understands politics and the ways of the palace, and yet she was never meant to sit upon the Unhewn Throne. Kaden’s eight years in isolation with the monks taught him the specialized mystical abilities that every emperor needs to know, but that also left him woefully ignorant of the ways of his future empire, including the laws of the land and cultures of his people – that and he has no idea at all how to fight and protect himself. In contrast, Valyn’s time with the Kettral taught him how to fight, survive, and form battle strategies, but unfortunately not much else. When it comes to what makes a great leader, it seems that each sibling has only a piece of the whole. But their years spent away from each other doing their different things also made them drift apart, leading to mistrust and suspicion. Whether they will end up working together or be divided remains to be seen, and that’s one of the main things I’m looking forward to finding out in the future of this series.

While The Emperor’s Blades was a pretty good book, like I said, everything about The Providence of Fire just feels even bigger, deeper and more improved. It’s almost like Brian Staveley took the doors to the series and flung them wide open, vastly expanding upon the world, the story and all the characters. In my review of the first book, I summed it up by saying that it was a promising start and in the sequel I would like a deeper look into the history and magic of the Annurian Empire, as well as a larger role for Adare. Well, you can bet I got everything I wanted and more in The Providence of Fire. The fate of the empire hangs in the balance, not to mention the futures of Adare, Kaden, and especially Valyn. Once again, the author ties everything up while teasing a lot more to come in the next installment, except now I’m even more excited for the next book.

A review copy of this book was provided to me by the publisher in exchange for an honest review. My thanks to Tor Books!

21 Comments on “Book Review: The Providence of Fire by Brian Staveley”