*** The giveaway is now over, thank you to everyone who entered! *** 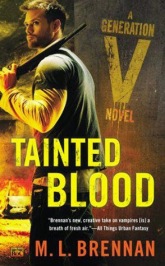 Once again, M.L. Brennan reminds me why this is one of my favorite urban fantasy series right now! I simply love how the Generation V books break so many of the genre’s rules.

First off, forget about immortal vampires that ooze sexuality from every single attractive pore on their flawless runway model bodies, because here we have Fortitude Scott, a vampire protagonist who is very much an underdog and is as down-to-earth as they come. And how ‘bout those family dynamics? Where else can you find a book in which the mother and siblings of said vampire protagonist have such a huge impact on his everyday life? I’ve always enjoyed the roles that Madeline, Prudence and Chivalry play in the development of Fort’s character, but this third book is where the author really drives that point home. The story here is, after all, about the blood ties that bind.

Unlike the first two books which both started off with a healthy dose of humor, a dark shroud of sadness hangs over book three’s introduction, because it is revealed that Chivalry’s ailing wife has finally passed away. The loss leaves Chivalry in no shape to attend his duties, meaning it’s up to Fort to step up and fill his older brother’s shoes. It’s a tough job keeping checks on all the supernatural denizens living in his mother’s territory, but Fort manages swimmingly with the help of Suzume, his kitsune sidekick and friend-who-he-wishes-is-more-than-just-a-friend.

Then everything goes to hell when the leader of a faction of bear shapeshifters turns up brutally murdered. It’s Fort’s first time handling an investigation and of course his family is no help (his mother Madeline’s sagely advice pretty much boils down to “Just handle it dammit, find a patsy if necessary”), but still Fort is determined to get to the bottom of this mystery and bring the true killer to justice. He just hopes he’s not in way over his head on this one.

Tainted Blood and the story of Fort’s first solo mission on his family’s business is definitely not to be missed! The twists and turns of the investigation had me on my toes, and as always the brilliant banter between the dynamic duo of Fort and Suze continued to have me chuckling all the way through.

But there are also a few other things I felt this book did extremely well, which I want to highlight. For one thing, you’ll definitely be floored by Brennan’s fascinating and unique take on the paranormal world and its creatures, an approach which has become her signature style. Her first book Generation V introduced us to the nitty-gritty details of the vampire life cycle, while her second book Iron Night portrayed elves in a way that I know will make me never look at Legolas the same way again. I can always depend on Brennan to have a cool supernatural race or two up her sleeve, and quite honestly, I would expect nothing less from an author who features the awesomeness of kitsune in her books! This time around, we get up close and personal with shapeshifters in the form (no pun intended) of werebears. Just, ah, don’t call them that to their faces, unless you want to risk getting your own clawed off.

What I really like are the checks and balances in the world of these books, providing an explanation as to why we puny humans aren’t overrun a million times over yet by all these supernatural beings that are so much more powerful than us. Every creature has a weakness to go with a strength. Brennan’s vampires, for example, are not immortal, and though the process is much slower, they can and will die of old age just like anything else. And while elves do enjoy the luxury of immortality, they are so violent and bloodthirsty that they’ve pretty much fought themselves to the brink of extinction, with problems of infertility and inbreeding to boot. Witches have powers that make them extraordinary talented healers, but they’re also the most isolated and scattered group because any large concentration of witches in one area can stir up bad juju and mass hysteria in nearby human populations. Details such as these lend Fortitude Scott’s world a touch of realism which is not always present in UF, and it’s something I don’t think is appreciated enough.

I also want to take it back to family dynamics, because this is another area where Tainted Blood excelled. Familial love can be a tricky thing to tackle, especially when it comes to so-called “monsters”. Fort may be a relatively harmless vampire trying to hold on to his human side as long as possible, though the same cannot be said of his mother and older siblings. But Madeline, Chivalry and Prudence are such fascinating characters simply because they love Fort and are fiercely protective of him, only they show it in their own very different and sometimes unconventional ways. This is brought to the forefront in Tainted Blood, when Fort’s interactions with each of his family members produce a wide range of emotional results. Perhaps for the first time, he catches a glimpse of weakness in his mother, a darkness in his brother, and – probably the most shocking revelation of all – a nice side to Prudence. Nothing is ever black and white, and I loved that about this book.

So if an urban fantasy with actual deep, meaningful and complex relationships sounds good to you, look no further than this series. And speaking of relationships, if you have been following these books and are rooting for Fortitude and Suzume in the romance department, you might be in for a real treat too!

Bottom line, fans of urban fantasy need to check out this series, and current fans MUST read Tainted Blood. There are significant developments brewing, and with all this foreshadowing of Madeline’s inevitable fate, I have a feeling this books marks the beginning of a turning point. We may be on the cusp of something huge. What can I say, but bring on the next one!

A review copy of this book was provided to me by the author in exchange for an honest review. My thanks to M.L. Brennan! 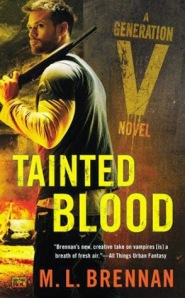 Here’s what you’ve been waiting for! The awesome M.L. Brennan has offered The BiblioSanctum the opportunity to host a giveaway for one SIGNED print copy of Tainted Blood to one lucky winner in the US. To enter, all you have to do is send an email to bibliosanctum@gmail.com with your Name and valid Mailing Address using the subject line “TAINTED BLOOD” by 11:59pm Eastern time on Tuesday, November 4, 2014. 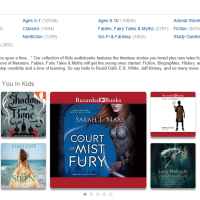