Tainted Blood by M.L. Brennan – November 4, 2014 (Roc)
I know what you’re thinking. Didn’t Iron Night just come out in February? TWO Fortitude Scott books in 2014? Oh, it’s too good to be true. But it IS true. If you haven’t read the Generation V novels yet, just what are you waiting for? Funniest, most unique vampire urban fantasy I’ve ever read. I’ve been waiting for the cover image to feature this one, and it was finally revealed last week. Not to sound unhygienic or anything, but I’ve just gotta get me some Tainted Blood!

“In the third Generation V novel, Fortitude Scott proves that working with family can be deadly…

Former film student Fortitude Scott is finally gainfully employed. Unfortunately, said employment happens to be with a group of sociopathic vampires—his family. And as much as Fort is loath to get too deep into the family business, when his brother, Chivalry, is temporarily unable to run the territory, it’s up to Fort to keep things under control. So when the leader of a powerful faction of shifters turns up murdered, Fort finds himself tracking down a killer while navigating dangerous rivalries, longtime grudges, and hidden agendas. Even with the help of his foxy kitsune sidekick, Suzume, he’ll need to pull out all the stops to hunt for the paranormal assassin. But as he calls on fairies, witches, and ghouls for help, he discovers that the problem is much bigger than a single dead werebear. The supernatural community is preparing for a massive shift in power within the Scott family leadership—and Fort has landed right in the middle of the gathering storm.…”


Ever since my friend introduced me to Octavia E. Butler through her Xenogenesis trilogy, I have been hooked. I own all of her books, even though I have still to read a few of them, and continue to be saddened by her loss. Imagine my utter joy at this discovery. I could not clicky that one-click-buy button fast enough!
Unexpected Stories by Octavia E. Butler – June 24, 2014 (Open Road) 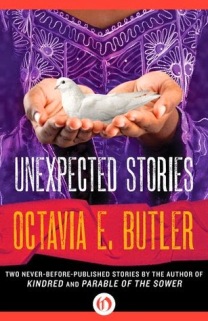 Two never-before-published stories from the archives of one of science fiction’s all-time masters
The novella “A Necessary Being” showcases Octavia E. Butler’s ability to create alien yet fully believable “others.” Tahneh’s father was a Hao, one of a dwindling race whose leadership abilities render them so valuable that their members are captured and forced to govern. When her father dies, Tahneh steps into his place, both chief and prisoner, and for twenty years has ruled without ever meeting another of her kind. She bears her loneliness privately until the day that a Hao youth is spotted wandering into her territory. As her warriors sharpen their weapons, Tahneh must choose between imprisoning the newcomer—and living the rest of her life alone.
The second story in this volume, “Childminder,” was commissioned by Harlan Ellison for his legendary (and never-published) anthology The Last Dangerous Visions™. A disaffected telepath connects with a young girl in a desperate attempt to help her harness her growing powers. But in the richly evocative fiction of Octavia E. Butler, mentorship is a rocky path, and every lesson comes at a price.