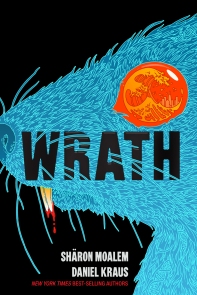 Told in a similar vein to books by Michael Crichton or technothrillers that feel like they can be made into summer blockbusters, Sharon Moalem and Daniel Kraus’ rat-infested collaboration Wrath is a contemplation of the ethics behind animal testing as well as the unquenchable thirst for science advancement—and what happens when everything goes wrong.

In the not-so-distant future, a popular biotech company is changing the way we own pets. After the successful introduction of its glow-in-the-dark goldfish, Edited Pets had promised to expand its ever-growing menagerie of genetically modified pets available to the public, but after a string of disastrous new launches, founder and CEO Noah is desperate for a win. His next big idea? Sammy. This genetically altered rat is engineered to be pocket-sized, extremely adorable, and gifted with the intelligence to be able to understand and interact with humans.

Noah has poured nearly all his company’s resources into developing Sammy, hoping to unveil the rat at an upcoming world pet expo. Unfortunately, his genetics team has recently run into a snag. None of his scientists have been able to solve the problem of Sammy’s rapidly growing brain and the failure of his tiny rodent skull to accommodate it. As a result, all early iterations of Sammy have been met with painful, premature deaths before they could be fully grown.

The Sammy project would appear to be over before it has even begun. That is, until Noah’s friend and lead scientist Sienna comes up with a brilliant plan to overcome their obstacles. It’s not a permanent solution by any means, but at least it will allow Sammy to debut at the pet expo. What no one expected, however, was just how intelligent their creation as become—intelligent enough, for example, to devise an escape plan from his confinement to the lab into the outside world, where his biological drive to breed will put the entire human race under threat of being overcome by a vengeful army of rats just like him.

First things first: you’re going to have a hard time getting through this novel if you have a fear of rats, but also if you’re disturbed by harsh depictions of animal experimentation and the resulting injuries and deaths. Noah and Sienna are both POV characters, but the story does not treat them kindly, the former being the archetypal smug tech CEO elitist whose only concern is his reputation and bottom line, the latter being so caught up in her own good intentions that she loses sight of the dangers of playing god. It’s almost enough to make you sympathize with Sammy, the rat. Believe it or not, he gets his own POV too, and even though he’s the one wreaking all the havoc, it’s hard to fault this poor abused little creature who was an innocent in all this until the dastardly humans decided to mess with his genes.

What I also liked about Wrath is how accessible it was. You don’t need to be a science geek to understand what Noah and his team at Edited Pets was trying to do, and the descriptions of the genetic modifications process were just detailed enough without being overly mired in the techno lingo. That said, the science behind the premise is going to feel a bit far-fetched, but that’s the reality with a book like this where there’s always an expectation that things will get a little over-the-top. Characterization isn’t exactly a priority either, as the plotline places more emphasis on keeping up the action and a snappy pace, much like a screenplay of a Hollywood blockbuster.

Still, if you’re willing to suspend your disbelief and go with the flow, enjoying Wrath shouldn’t be a problem. Just as long as you don’t have musophobia, or this sci-fi thriller is going to feel a lot more like horror.