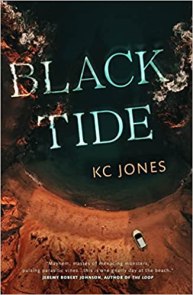 A generous helping of cosmic horror with a side of end of the world, K.C. Jones’ Black Tide couldn’t have come at a better time to meet your summer beach reading needs.

In this story we meet Beth, a self-professed trainwreck who has arrived on the Oregon coast to housesit a gorgeous home and look after its owner’s dog, but she’s also mostly there to put some distance between herself and her toxic mother. There, she meets her next-door neighbor Mike, a troubled movie producer who is in town to wind down following the successful completion of his latest film. On the night of the meteor shower, the two of them end up hooking up after a few too many glasses of champagne, and in the morning everything changes.

Beth and Mike wake up to a different world. The sky looks unnaturally dark with strangely shaped clouds, and along the beach they find it littered with mysterious round objects. Like our protagonists, the other locals have come down to the water to marvel at the eerie sight. When the police arrive, they look as worried as everyone else, warning folks not to get too close and to seek shelter and stay indoors. When Beth and Mike try to leave, however, they find that they have misplaced the car keys, leaving them stranded on the dunes as the tides rise and something monstrous emerges.

Think of some of the most nerve-wracking, immediate apocalyptic horror movies you’ve seen, and you can perhaps imagine the tone this sets for Black Tide. Reminiscent of The Mist or Cloverfield, the novel certainly invokes those feelings of dread and helplessness as you witness the world end around you. Everything pretty much unfolds in the span of a day, which makes this story feel even more claustrophobic and urgent. What we’re seeing is merely a small slice of the greater disaster that’s happening everywhere else, through the eyes of just two people, but it’s a device that’s also very effective.

Speaking of which, we have our two main characters, Mike and Beth, who aren’t exactly action hero or heroine material. In a way though, that made the story even better. They’re average people trapped in a chilling, chaotic situation, and you can’t help but wonder if you’d handle it any better if in their shoes. It helped that they were sympathetic protagonists, who had well-written and convincing backstories. Beth is dealing with some deep-rooted issues related to her mother, while Mike is in mourning. The two of them have little in common and neither are in their best state of mind, but they’ve come together by chance nonetheless, and together they’ll have to work together to survive.

Their relationship is also an interesting one. For two people who barely know each other, they have great dynamic and are a treasure trove of memorable quotes. The story is tense and frightening, but it’s also surprisingly humorous at times, which does help to take the edge off, without being inappropriate or pulling you out of the moment. In fact, the author has managed to create a nearly perfect balance, setting a fast pace without skimping on the details. Like I said, it’s an intense novel and it’s plenty scary, which I guess is the whole point, but there definitely a deeper plot to it as well, and it makes you care about what happens to the characters (and the dog).

Bottom line, a great horror read and also an audiobook wonderfully narrated by John Pirhalla and Sophie Amoss, who fully immersed me in Black Tide and just made the time fly by.