To celebrate science fiction during the month of November, I’ve put together a series of posts I’ll be doing on Tuesdays to highlight the sci-fi tropes or themes that I find simply irresistible! I’ve also been fortunate to read some great books in the genre over the last few years, and to give them some extra attention, each week I will also be featuring five titles that I recently enjoyed or thought were pretty special.

So, Halloween might be over, but that doesn’t mean the horror has to stop! Today’s topic is one that pops up very often in in sci-fi horror, because earthly diseases are bad enough, but who knows what an alien virus can do? Without further ado, I present to you the following list of books featuring EXTRATERRESTIAL PLAGUES. 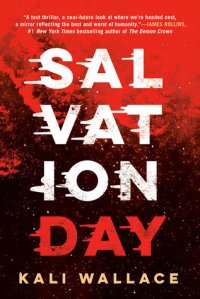 Salvation Day is a thrilling, cinematic experience. Around a decade ago, the space exploration vessel House of Wisdom became abandoned after a deadly infectious virus was released on board, killing everyone on the ship. The sole survivor was Jaswinder, the son of a very prominent family in the political and scientific community. Subsequently adopted by his aunt, Jas spent the next ten years pretending he could not remember what happened and has tried to keep a low profile ever since. Meanwhile, the spaceship, which has become massive tomb, is left drifting in space. Now older, Jas is about to embark on his first journey back into space since the incident, along with a small group of his friends. But unbeknownst to him, he is the key to a plan hatched up by a cult who want to use his genetic signature to bypass the security measures guarding House of Wisdom. Zahra is one of the members of this cult, acting upon orders to hijack Jas’ shuttle and kidnap him. But not long after they take over of the shuttle, everything starts going wrong. Not surprisingly, when they reach the House of Wisdom, they find bodies. However, what Zahra finds disturbing is not the presence of the dead, but the way that they died, which does not appear consistent with what was reported by the government. She and her team had been inoculated against the virus that supposedly killed everyone, but the threat they are faced with is something else entirely. (Read the full review…)

Contagion by Erin Bowman stars the ragtag crew of the Odyssey, a mining ship that responds to an SOS at a seemingly deserted base on a remote planet. Led by their determined but inexpereinced captain Dylan Lowe, the team immediately begins searching for survivors but instead find a pile of dead bodies. The ship’s doctor, microbiologist Dr. Lisbeth Tarlow appears baffled at the cause of all the death and carnage, but her seventeen-year-old intern Thea Sadik suspects her mentor may know more than she lets on. Meanwhile, the Odyssey’s pilot Nova Singh struggles with her developing feelings for Dylan, even as the headstrong captain makes increasingly impulsive decisions that endanger her people. On the planet, the crew also finds a disturbing message along with a chilling video made by one of the personnel before he died. Not long afterwards, the group is separated and Thea’s life is saved by a mysterious young man who claims to be the only survivor. But who is he and where did he come from? How did he stay alive when no one else was spared by whatever killed them? Finding the answers becomes imperative as one of the Odyssey’s crew suddenly becomes infected with an unknown contagion, putting all of their lives at risk unless the outbreak can be contained. (Read the full review…)

Illuminae follows a pair of high school students, Kady and Ezra, who break up the morning their planet was invaded. Talk about poor timing. It is the year 2575 and whole galactic empires are ruled by megacorps, and the two teenagers just happen to reside on Kerenza, a small ice planet on the edge of the universe involved in a secret and illegal mining operation by one of these corporations. Rival corp BeiTech descends upon them, destroying the Kerenza settlement, leaving thousands dead and on the run. Kady and Ezra are among the lucky (unlucky?) survivors who end up on the Alexander fleet, made up of the three ships that came to Kerenza’s rescue. Damaged and crippled, the fleet limps away towards the closest jump gate more than half a year away, while an enemy dreadnaught follows in hot pursuit, determined to leave no witnesses. But when it comes to the refugees’ problems, that’s only the tip of the iceberg. Exposed to some of the biological weapons BeiTech used in their attack, many of the survivors come down with a highly contagious plague which turns its victims into mindless, savage husks. To make things worse, several systems on the Alexander were also damaged beyond repair, resulting in a crazed AI running the ship. Through it all, Kady and Ezra are starting to realize just how tiny and insignificant their problems were back in their simple, sheltered lives on Kerenza. After all this death and destruction, all they have left is each other. (Read the full review…) 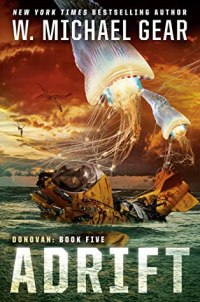 Adrift is the fifth book in the Donovan series, taking us to the seas where the Maritime Unit has just set up their research facilities perched on the edge of a reef, hundreds of miles from the closest shore. Having survived the last ten years trapped aboard the Ashanti with a cult of cannibals, the members of this small team mostly made up of oceanographers and marine scientists are excited to have finally arrived on the planet and are eager to start studying its aquatic ecosystems. Unfortunately though, hubris proved to be their downfall. Most of the members of this close-knit group are parents, their children having been born on the Ashanti, and this shared communal experience of raising their kids under those harsh conditions had brought them all even closer than before. But from deadly sea monsters to killer algae, poor Maritime Unit never catches a break. They thought they could handle themselves and do their research the way they wanted to, but no one understands life on Donovan, and anyone who thinks they do are taught a swift and deadly lesson. (Read the full review…) 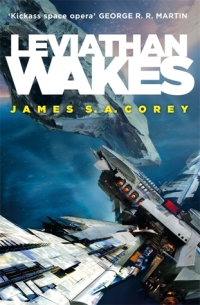 When James Holden and the crew of his ice mining ship encounter a derelict ship near Saturn, they find themselves in possession of a deadly secret that certain shadowy factions are willing to kill for. Now Holden is on the run, even as tensions are running high through the system, threatening to boil over. Meanwhile, a whole different world away, a detective named Miller is looking for a missing girl on Ceres. Her father is a billionaire who seemingly has unlimited resources to throw at the search, but his daughter proves elusive, having run away to join the Outer Planets Alliance, a loose network of militant organizations. Eventually though, Miller does find her, which also leads to the discovery of a mysterious new organic life that infects the body and feeds on exposure to energy and radiation. With all that has happened in The Expanse series after so many novels and even a TV show, it’s easy to forget it all began with the protomolecule, an alien entity first discovered on Phoebe and then released on Eros as part of an experiment to find out what it was designed to do. Well, we sure found out, didn’t we?