YA Weekend Audio: ReDawn by Brandon Sanderson and Janci Patterson 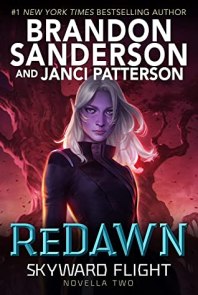 ReDawn is the second volume in the Skyward series of novellas, which is looking more and more like recommended reading before Cytonic comes out despite these books being about the different flight squad members other than Spensa. One of my criticisms about the previous book, Sunreach, was that it felt too much like a “throwaway” story, but that’s not looking like the case anymore, as more impactful world-changing events are starting to happen.

In this one, the attention switches tack to fall on Alanik, an outsider from the planet ReDawn who had the misfortune of crashlanding onto Detritus. But what she found there were a group of humans and possible allies with aims that were similar to her people’s—to fight against their shared enemy, the Galactic Superiority.

Following her recovery, Alanik mets Jorgen and FM of Defiant Defense Force’s Skyward Flight. As graciously as she is being treated, however, it is clear that the higher-ups of the DDF don’t entirely trust Alanik, nor are they willing to commit the forces to help her cause. With alarm, Alanik also discovers that the humans are considering the peace overture being offered by the Superiority, falling into the same trap as the people of ReDawn. It appears no one has heeded Spensa’s warning of false peace, so it is up to a group of rogue pilots to take matters into their own hands, risking their futures on a hope that their Cytonic slugs will give them the upper hand.

Thus far, these novellas are doing a great job fulfilling their purpose of shining the spotlight on the supporting characters and giving readers a chance to know them better. Alanik is a great example, as she was in the background for much of the novels in the main series, but that didn’t mean I wasn’t curious about her character or her origins. ReDawn became an opportunity to learn about her planet, its people and their customs, and it is here that Brandon Sanderson’s flair for anything world-building related could be felt most strongly.

In terms of the writing though, it is still rather evident that it is Janci Patterson taking on most of those duties. That said, I was impressed. With Sunreach, Patterson may have had limited opportunity to stretch her creative muscles, with FM sounding so similar to Spensa. With Alanik, however, it’s a whole different ball game. Her voice was distinct enough to give a clear sense that we were dealing with an alien culture. This was reflected in everything from the character’s internal thought processes to her speech patterns (as well as her oftentimes hilarious translations of human sayings), a not insignificant feat especially since the end results were quite convincing. I listened to the audiobook, so a special shoutout also goes to Suzy Jackson who narrates this series, but still managed to sound like a completely different person when she was reading Alanik.

This novella also moved the series arc forward quite considerably, and as I mentioned, there were some pretty big, consequential developments. More about the Cytonic slugs have been revealed as their role in this saga continues to expand, and my mind is still blown by all the things they’re being used for (though to be fair, that has been one of the joys of this series since the beginning). And then there was that gut-punch of an ending, which made me feel heartsick yet also intrigued as to what this bombshell would mean for the members of Skyward Flight going forward.

Needless to say, I’m excited for the next chapter of this series, which would be Cytonic— still a few weeks out from publication as of this writing. But then I’ll also be looking forward to Evershore, the third novella, which would be coming out approximately a month after that. While I might have been skeptical before, ReDawn has convinced me that there may be more merit to these novellas than previously thought, and considering the way it wrapped up, I have a feeling the next one will be quite momentous.

More on The BiblioSanctum:
Review of Sunreach

13 Comments on “YA Weekend Audio: ReDawn by Brandon Sanderson and Janci Patterson”