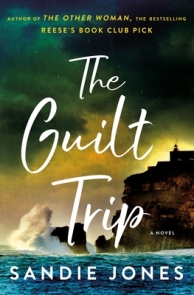 The Guilt Trip by Sandie Jones

Twenty years’ worth of secrets and suppressed truths all come out in a single weekend, as two couples come together for a third’s destination wedding in a gorgeous cliffside villa in Portugal. Sandie Jones’ latest suspense thriller The Guilt Trip is so titled because the protagonist, Rachel, knows keep down she’s selfish for wanting her best friend Paige along by her side when her brother-in-law Will gets married. The younger brother of Rachel’s husband Jack is a great guy, but his fiancée Ali just seems to rub everyone the wrong way—she’s flaky, embarrassingly loud and impulsive, and has a tendency to exaggerate or overembellish her own accomplishments. Just the thought of having to spend the whole time making small talk with Jack and Will’s family while putting up with Ali by herself makes Rachel feel sick. Still, if Paige was there, things might not be so bad, especially since her husband Noah is also an old college friend of Rachel’s.

Even before they can get on the plane though, Ali causes a scene at the airport by misplacing her passport. Then she pretends to get drunk on the flight. Even after the group finally makes it to Portugal, where they meet Will, Rachel’s future sister-in-law just seems to have a knack for making them all feel uncomfortable. At just twenty-nine years old, beautiful and shapely Ali makes Rachel feel old and ungainly in comparison, but some of the others are practically hostile towards the younger woman. Paige doesn’t like Ali’s fake and attention-seeking ways, and Jack has admitted he doesn’t trust her and fears his brother is making a terrible mistake. When pressed why, Jack finally reveals that he believes Ali may have cheated on Will. Rachel, Paige, and Noah are shocked, of course, but with the wedding almost upon them, what could any of them do? The four of them agree that, for the sake of Will’s happiness, they’ll just have to keep their mouths shut and get through the weekend. But with the way Ali carries on, that might not be as easy as any of them think. There’s something not quite right about the bride-to-be, the way she seems just a little too friendly with Jack, or her propensity to lie and get all up in others’ business, stirring up old secrets that are best left in the past.

So, is The Guilt Trip really a mystery thriller? Or is it a drama-filled soap opera? Of course, you’d be forgiven for thinking the latter, if you simply go by the first half. For example, it’s revealed pretty early on that Rachel and Noah used to be besties in university. In a moment that changed the trajectory of their lives forever, Rachel decided not to go with Noah on his year-long trip abroad, choosing instead to stay behind to see how things will work out with Jack, her new boyfriend at the time. But while Rachel and Noah’s relationship had remained platonic up to that point, on that final night, one thing led to another, and well…let’s just say there are things Rachel hopes Jack will never never ever in a million years find out. Because by the time Noah came back from his year away, Rachel was planning a wedding and expecting a child, and so he went on to meet and marry Paige. While the two women eventually became best friends themselves, as you can see, there’s a lot of history there and it wasn’t all open and honest.

And then there’s Ali, which is like throwing a grenade into an already heated situation. She’s definitely a character with a boatload of secrets of her own, and I think at times the author plays it up a tad too heavily, threatening to reveal her hand early. You also have to be willing to suspense your disbelief, BIG TIME. I mean, it’s hard to imagine someone like Rachel who has been married to her husband for twenty years having all of these misconceptions about him and being so unwilling to communicate. The plot also thrives on misunderstandings, featuring of the kind of problems that can be solved in like two seconds if only the characters would stop making dumb assumptions and just sit down and talk to one another, for God’s sake. So, if those are the types of stories that frustrate you, then this one is going to really try your patience. With most of the book being told through Rachel’s perspective, and she being such a difficult protagonist to engage with (read: stupid and naïve), that can be a point of challenge as well. There aren’t too many likeable characters here, I’m afraid. From arrogance and dishonesty to pettiness and insecurity, they all seem to have their hang-ups and nasty sides to their personalities, but then, I suppose that’s also par for the course when you’re dealing with this genre.

Still, it was fun and never boring, and in the end, that’s what counts when it comes to thrillers. While the first half did not really feel like one, I think the final sections of the book went a long way to redeem that. My only criticism about the ending is that it was too rushed and wasn’t developed enough for the maximum impact, but on the whole I also enjoyed The Guilt Trip as much as my first two novels by Sandie Jones, so that’s definitely a win. For a more intense and full-bodied mystery thriller, there are no doubt better books out there, but if you’re just looking for something quick and entertaining as a popcorn read, this will do just fine. I look forward to whatever the author writes next.

18 Comments on “Thursday Thriller: The Guilt Trip by Sandie Jones”