#WyrdAndWonder Book Review: The Trouble With Peace by Joe Abercrombie 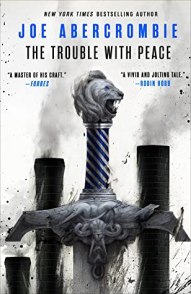 The Trouble With Peace  by Joe Abercrombie

Series: Book 2 of The Age of Madness

The Trouble with Peace by Joe Abercrombie continues The Age of Madness saga which began in A Little Hatred, and we’re catching up with all our characters in the North versus the Union conflict. To recap, Rikke is the daughter of the famed Northman fighter Dogman, and she has the gift of the Long Eye. Unable to control it, however, the second sight also has the power to kill her. Meanwhile at the capital, Leo, the son of Finree and Harod dan Brock, is in recovery following his injury taken in battle. Unfortunately, the long convalescence also means sitting around doing a lot of politicking, and the Young Lion finds he has very little patience or appreciation for it, as he still hungers for glory.

Things aren’t going too great for Savine dan Glokta either, with her financial situation in ruins and a baby on the way. Still, she has not gained her cunning reputation for nothing, and sets to work rebuilding her fortunes by seeking out new alliances. And then there’s Prince Orso, who became the new king following his father’s death, but the crown now weighs heavily on the pampered playboy’s head, with all the responsibilities that come with leadership. Social unrest is tearing the realm apart, and his own advisory council cannot come together to support him. There will be no respite, it seems, and no peace. This much is especially obvious, considering how in the North, the brutal war chief Stour Nightfall has solidified his rule and has set his sights on expanding his influence by attacking the Union.

As you can see, things have not gotten much better for our characters, and life continues to be a struggle in this bleak, brutal world. Political maneuvering and strategizing play a huge role in this one, as a good chunk of the story plays out in the capital and tensions are created through uncertainties in the power players’ behaviors and choices. There was still quite a bit of action, but they regrettably didn’t stand out too much for me. Rather, it was the intrigue and character dynamics that really drove the plot this time around.

In many ways too, The Trouble with Peace felt like a bridge book, in that it stays pretty much in a holding pattern and deviates very little from the overall tone and general direction established by the first book. That’s a sword that cuts both ways, I suppose, for if you enjoyed what you saw from A Little Hatred, I think you will be pleased to see this sequel carry on down this same path. That said though, don’t expect to see too much out of character development. Despite changes in many of their circumstances, I feel like none of our main characters have made much progress in terms of personal growth. Again, depending on the kind of reader you are, you might find comfort in this familiarity, but I can’t help but feel like there could have been more. Part of the problem is that we do have so many POVs to cover, and I can see how balancing them all can be a challenge, one that even a seasoned author like Abercrombie would have some trouble overcoming.

Still, to be clear, that there was a lack of growth did not diminish my love for the characters or my interest in them one bit. They were awesome, they are still awesome. Ask any fan of the author why they love his books and there’s a good chance they’ll point to his knack for writing morally grey characters, and the ones here are definitely proof of that. Every single one of them is a unique collection of personality traits, albeit more flaws than merits. You see this especially clearly when Abercrombie employs the good old “same scene from different perspectives” device on several occasions, where you get to experience all the little subtle nuances, and that’s what keeps things interesting, isn’t it? What’s more entertaining than watching a bunch of confused, misguided young people stumble their way through their messed up lives with no clue what they’re doing?

Story wise, that’s kind of where we’re at, anyway. Like I said, we’re still neck deep in the main conflict, but this novel also introduces and advances a lot of new developments, keeping the hook baited while biding time until the ending with its inevitable bloody battle. But even though I knew it was coming, it was still an awe-inspiring event. Having spent the majority of the book developing the political and ministerial side of things, the author really let loose for this final stretch, delivering what might be his most vivid and intense action sequences to date.

To sum it all up, The Trouble with Peace is a sequel that holds true to the grimdark traditions set by its predecessor—or heck, by the first seven books and numerous short stories that came before it, if we’re talking all the works in The First Law world. Although in some ways it still feels like a bridge book maintaining the current situation with no major progress to the storyline or characters, it nevertheless introduces more intrigue and flavor to the elements you already love.

More on The BiblioSanctum:
Review of A Little Hatred (Book 1)

12 Comments on “#WyrdAndWonder Book Review: The Trouble With Peace by Joe Abercrombie”