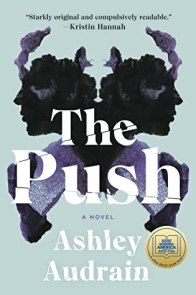 The Push by Ashley Audrain

Three days after reading The Push by Ashley Audrain, I still don’t really know how I feel about it! This book makes you question everything, but it’s definitely not the kind to hand you all the answers. At its heart is a story of difficult motherhood like no other, through the eyes of one of the most disturbingly unreliable narrators I’ve ever read.

Traumatized by her own harsh childhood of growing up with a distant and uncaring mother, Blythe never thought she wanted kids of her own, but that was before she met Fox in college—her perfect boyfriend who would later become her perfect husband. Loving, kind and gentle, Fox was always meant to be a father, and Blythe soon warmed to the idea of starting a family with him, despite her reservations and memories of the past. After all, she was determined not to let history repeat itself, and so long as she and Fox were a team, she was convinced that together they would conquer any challenge—even parenthood.

Soon, their daughter Violet came along, but what didn’t arrive as expected was the sense of joy and connection to her baby that Blythe had so badly wanted. Of course, it didn’t help that Violet was a difficult child from the start, seeming to actively reject all of Blythe’s efforts to calm or comfort her, though with Fox she would be an absolute angel. As Violet grew older, it only got worse. Blythe fears there is something wrong with her daughter, the way her eyes sometimes flash with something cruel or wicked behind them, or the way the other children at preschool would shy away in fear. No one else seems to notice, causing’s Blythe’s resentment to grow and a rift to develop between her and Fox. Desperate to fix things, she hastily agrees to have another child, though later, she realizes that the arrival of their son was exactly what the family needed. Blythe’s mothering instincts were reawakened with Sam, a happy child who was adored by everyone, even his temperamental older sister Violet. However, the bliss is short lived. Tragedy strikes out of the blue, dealing a final, irreparable blow to Blythe’s marriage, and worst of all, she can’t be sure if her own daughter had a role in what happened.

Told in a unique and distinctive style which has Blythe narrating her story to her husband, the book also alternates between flashback chapters which include the perspectives of her mother Cecilia and grandmother Etta. By establishing that our protagonist came from a long line of women with a track record for suicide, abandonment, and abuse, we’re able to sympathize with her determination to break that cycle.

Unfortunately though, the law of reverse effect in full play. Heartbreakingly for Blythe, it seemed that the harder she tries to be a good mother to Violet, the worse their relationship gets. True, The Push is a psychological thriller, but in many ways it is also a commentary on the pressures of mothers in society, and the question of nature versus nurture. Echoing the stories of so many first-time mothers, Blythe’s disillusionment begins on day one as her perfect birth plan falls apart and she fails to form an immediate bond with her daughter. The difference though, is that Blythe never seems to move past feeling this failure, and the emotional toll this has on her can be deduced from her increasingly unreliable narrative. As her discomfort around Violet grows, doubts arise about her mental state. Could she be exaggerating the problem? Might she be justifying her mistakes or reading too much into things? As the reader, I wanted badly to believe her, but as her actions grew more erratic and paranoid (not to mention more stalkerish and manipulative), it became hard not to ask these questions. Blythe also goes through a lot, suffering experiences I would not wish upon anyone, and that most certainly has an effect on her perceptions as well.

Speaking of which, The Push touches on some dark and uncomfortable themes. That sense of unease settled in early as I started reading, and to be honest, it never really left me. Part of this is due to the aforementioned dark themes, but admittedly, some of it probably had to do with the lack of answers and clarity as well. The final line of the book was especially infuriating and I can’t say it helped at all with providing closure.

Still, this was a fascinating read, and provided a lot of food for thought. The Push is definitely not your run-of-the-mill thriller that you can read and enjoy and then set aside as you move on to the next one. I think if some of the story’s topics weren’t so sensitive and distressing, this would make an excellent book club title, spawning all kinds of interesting discussion. Even though all the elements didn’t quite come together in a satisfying manner, and the ending kind of swings and misses, this is still the kind of novel that stays with you and burrows under you skin. I have to give it credit for holding my full attention, making me wonder and question everything along the way.

26 Comments on “Thursday Thriller Audio: The Push by Ashley Audrain”