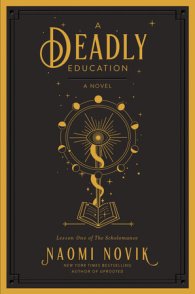 A Deadly Education by Naomi Novik

Truly, A Deadly Education by Naomi Novik was a fine book, but considering how high it was on my list of most anticipated releases this year, I can’t deny I was disappointed. For a novel with such a tantalizingly title and synopsis, I guess I had expected a little more action and intensity, but clearly I had misjudged or let the hype get the better of me. Still, it was enjoyable for what it was, and I think magic school fans will be well pleased, though word of advice, you might want to brace yourself for a slow-burner.

Our story takes place in Scholomance, a school for magically gifted children. Galadriel “El” Higgins is the main character of this tale, and she has long been burdened with a prophecy. Before she was born, her father had died while protecting her pregnant mother at their graduation ceremony, where both of them had been seniors facing their final challenge—a battle against a swarm of maleficaria, or “mals”, which are magic-feeding monsters of nightmare that routinely break into the school to devour unwary students. Heartbroken and grieving, El’s mother had brought her infant daughter to her father’s family after she was born, hoping for love and support, but instead receives a dire warning. El has an affinity for dark magic, and one day, she is foretold to bring destruction and ruin to the world’s magical enclaves.

Having something like that over your head can be rough, and not surprisingly, El grows up to be a rather cynical and surly young woman. Herself now a student at Scholomance, she has poured her full attention into her studies, scoffing at the idea of making friends. Still, that doesn’t mean it doesn’t sting when nobody even seems interested in getting to know her. Everyone who has heard about the prophecy and of her destructive magic has wisely decided to stay far away—all except another student named Orion Lake, who himself is a bit strange. A promising wizard and talented monster slayer in his own right, Orion has apparently made it his personal mission to rescue El from all mal attacks, not realizing he is spoiling all her carefully laid plans. With graduation fast approaching, El has no choice but to alter her tactics, overcoming her disdain for relationships in order to form some new alliances. With this year’s crop of mals especially strong, vicious, and hungry, there will be no surviving the gauntlet without help.

Doesn’t that sound amazing? I thought it sounded amazing. Which is why I’m mystified as to why this book was such a struggle, especially at the beginning. In all likelihood, it was a combination of factors, like the character’s personality, story pacing, an excessive abundance of emo schoolyard drama, etc.

We’ll begin with our protagonist El, who is ill-tempered and snooty—and not in a cutesy endearing way either. She’s plain obnoxious, has a chip on her shoulder the size of Texas, and seems to take pride in being awful to everyone around her. Look, I get it. It’s not easy being known to the magic community as the bringer of death, but bloody hell, woman! When you’re drowning and someone offers you a life preserver, can you for once maybe not act like a massive bitch? Worse, every time it seems like El is finally making some headway in this area, next thing you know, she immediately turns around the blows it.

Next factor is the pacing. Like I said, the first half of the book is pretty sluggish. Novik is usually so good with world-building in terms of working the details naturally into the narrative, which is why I was shocked to see so much info-dumping in the early chapters. In fact, it felt like a good chunk of the novel was exposition, mostly of the main character going on and on about some trivial matter or another in great detail. I hate to say it, but the first half felt like a lot of talk and no action. I also think the author was trying for a more mature tone, but the amount of teen drama and angst coming off of El gave this one too much of a YA feel, except with less excitement and interest.

The good news is that the second half picked up immensely, and the fact that this coincided with a sharp uptick in mal action should come as no surprise. I enjoyed the whole “survival of the fittest” idea behind the school, but it wasn’t until I was well into the book that I finally began to understand and appreciate the stakes, which definitely raised the intensity levels and made the book so much fun to read. However, my main concern is that this might be too late for some readers. Not going to lie, it was almost too late for me, but thankfully, the strength of the second half went a long way in making up for a lackluster first half.

All in all, a weaker start with a strong finish is still always going to be better than the other way around, at least for me. While the first half might have been a bit of a slog, the second half and ending won me over, and I am convinced to carry on with the next one.

← YA Weekend Audio: Fable by Adrienne Young
Most Anticipated Releases of 2020: October to December →

20 Comments on “Book Review: A Deadly Education by Naomi Novik”