Audiobook Review: If It Bleeds by Stephen King 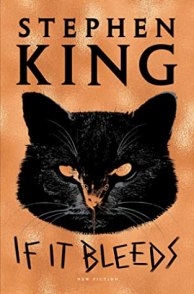 If It Bleeds by Stephen King

What a great collection to ease myself back into the work of Stephen King! I used to read a lot of his stuff, but admittedly not so much these days. In fact, The Outsider was my first King book in almost eight years, but because I enjoyed it so much, it also motivated me to pick up If It Bleeds, a collection of four novellas including the title story which features another harrowing adventure with Holly Gibney. Below are my thoughts on each one.

A sweet but at times unsettling story of a boy’s unique friendship with his elderly neighbor, this opening tale had vibes of Hearts in Atlantis and ended up being one of my favorites.

Initially set in the late 2000s, it introduces readers to Craig, our young protagonist who does odd jobs for Mr. Harrigan, a retired business magnate. One day, Craig wins several thousand dollars from a lottery scratch ticket gifted to him by Mr. Harrigan, and having just recently received his very own iPhone, the boy decides to surprise the old man by getting him one as well. Considered cutting-edge technology at the time, the phone quickly becomes a focal point of their relationship, leading to the two of them discussing apps and sharing what they’ve learned with each other on a regular basis—until the day Mr. Harrigan passes away unexpectedly.

I loved the concept behind this story, and the central theme of technology bringing together people from different generations and disparate walks of life. Mr. Harrigan was a great character, and Craig’s friendship with him was very unique and special without sacrificing sincerity. There’s also an element of the supernatural which occasionally pushes the narrative into horror territory—nothing too frightening or dramatic, but do expect plenty of chills down your spine from this one.

The Life of Chuck – 3 stars

King tends to adapt his style to whatever he’s writing, and I find this to be far more noticeable when it comes to his short stories. I’m not usually a fan of his more abstract and metaphysical stuff, which might explain why I didn’t connect with this novella as much as the others.

Told backwards in several parts, this story starts with the coming apocalypse. The world is falling apart, and suddenly, everything comes down to a dying accountant named Chuck. It’s hard to describe the plot to this one, since the very nature of its structure makes it confusing and disjointed. The style almost feels experimental, which I did not really enjoy. No doubt some readers will have a blast with this story, especially if you’re into King’s brand of weirdness, but due to its lack of cohesiveness and closure, I can’t say it left me too satisfied.

And here we come to the title story and the longest novella in this collection. It is highly recommended you read The Outsider before tackling this one because it is something of a sequel, catching up with Holly Gibney following her encounter with a creature of pure evil.

Without spoiling too much of the story, If It Bleeds begins with detective Ralph Anderson receiving a cryptic note from Holly along with a package containing a drive full of evidence from her latest case. In the event she should die during the course of her investigation, the message reads, Ralph must be careful if he decides to finish what she started. In essence, Holly is convinced that she has found another outsider, a creature that feeds off misery and can change its form to avoid detection, after a horrible explosion at a school in Pennsylvania.

Obviously, being a novella, this story isn’t as rich or powerful as The Outsider, but it does contain many of the same themes as well as similar levels of action, thrills, and suspense. But of course, the big bonus here is that readers will get to spend more time with Holly, who simply won’t stop stealing our hearts with her determination and moxie.

And now we come to the final story, which I totally ate up because it exuded that old-school horror vibe. The protagonist, Drew Larson, is an aspiring writer with a dream of completing his very first novel. Taking a sabbatical from his teaching job, he travels to a remote cabin in the Wyoming woods where he can work without the distractions from his family or work. But try as he might, the creativity juices just wouldn’t flow—until a bad storm blows in, bringing an unexpected visitor.

This one’s your classic make-a-bargain-with-the-devil story, which always ends badly. While it didn’t have the unique hook of Mr. Harrigan’s Phone or the heart-pounding urgency of If It Bleeds, I still enjoyed this one a lot. It’s the most eerie and chilling of the four tales, and that’s certainly a high note on which to end things.

Audiobook Comments: There’s a reason why Will Patton is so beloved among Stephen King fans, simply because his narration is amazing and his voice has this way of adding that extra bit of gritty magic to the author’s books. Steven Weber and Danny Burstein also add their talent to the mix, resulting in an incredibly rich and immersive listening experience for the If It Bleeds audiobook.

33 Comments on “Audiobook Review: If It Bleeds by Stephen King”