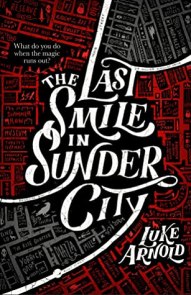 The Last Smile in Sunder City by Luke Arnold

This is going to be a short review because The Last Smile in Sunder City was a relatively short book—straightforward and uncomplicated, and that’s no bad thing. The story may be a bit on the sparse side for how fascinating its setting is, but author Luke Arnold makes up for this with the kind of care and intricate attention to world-building detail that we speculative fiction fans live for.

And really, what more do you need than a moody mystery that’s like a mix of urban fantasy meets detective noir? Welcome to Sunder City, a dreary home to a desperate populace doing whatever they can to get by now that all magic in the world is dead and gone. Six years ago, the human army, hungry for power, had sought to harness magic for themselves but instead destroyed it at its source, causing an apocalyptic event known as the Coda. From that moment on, everything that was fueled by magic failed or began its decline, and now a former human soldier turned PI-for-hire is trying o do all he can to atone for what he felt was his part in the disaster.

Meet protagonist Fetch Philips. When he’s not drowning his guilt and sorrows in cheap booze, he’s offering his services exclusively to non-humans as a way towards his own redemption. When the story begins, he has just been hired by his latest client, the principal of a cross-species school called Ridgerock Academy who wants Fetch to find their missing professor. It is a peculiar case in many ways, and not least because the victim is an elderly vampire—literally a dying breed since the Coda. And when further digging leads to more missing people and several close calls for Fetch, it’s clear something a lot more dangerous and complicated is going on.

That said, for a mystery novel, the detective story behind The Last Smile in Sunder City actually has very few mysterious elements, and in fact, one might reasonably say that it isn’t even the main plot at all. The true focus of the book is arguably the origins of Fetch Philips and the larger body of lore behind the setting, which explains the background and nature magic as well as how it all died in the Coda. Threaded through the present timeline are multiple flashbacks that also go on in rich detail about Fetch’s life, starting from his youth. While those who came into this hoping for more mystery and action might end up being disappointed in the constant shifts away from the investigative plotline, I believe fans of character-oriented stories will be very pleased with the depth and level of development Arnold has achieved here with his protagonist.

Then there is the truly awe-inspiring world-building. Clearly, a lot of thought has been put into this aspect of the novel, as everything from the history of Sunder City to the culture and lives of its people are inextricably intertwined and must be viewed as a whole. You can always tell when world-building is weak or lacking, since nothing feels connected and lots of explanations fall apart or don’t make sense when placed under even slight scrutiny. This is certainly not the case here, where the world feels like a real world should—a living, breathing system. Arnold has proven himself a double threat as an actor and an author, since his prose is evocative and solid (with even some delightful quirks added for flair), but his main strength in my eyes is his imagination and ability to convey his ideas and characters’ emotions in his writing.

Sure, I wouldn’t have minded something more on the story front, but even with a light and familiar premise at its heart, The Last Smile in Sunder City was a surprisingly good read. While its plot is nothing fancy, what the book does well, it does extremely well—namely, the world-building is clever and superb, not to mention the character development is to die for. I am very excited to see what Luke Arnold will bring in the next book in The Fetch Philips Archives!

17 Comments on “Book Review: The Last Smile in Sunder City by Luke Arnold”