Audiobook Review: Twilight of the Gods by Scott Oden 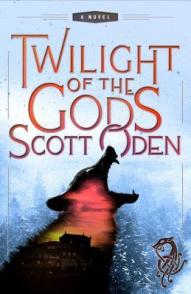 Twilight of the Gods by Scott Oden

A few years ago, I read a terrific book called A Gathering of Ravens, a fantasy epic which wove together the flowing threads of myth and time. Its protagonist, Grimnir, was called orcnéas—an Orc—but regardless of the names they gave him, all saw him as a monster. Readers, however, soon saw that he was much, much more.

Now in this sequel, aptly titled Twilight of the Gods, our story with Grimnir picks up again in the early thirteen century, a time where only a few still follow the old ways while Christianity continues to spread across the world. The Raven-Geats are one such people, a northern clan which holds deep beliefs in their Asgardian gods even as they pay tribute to the Christian King. Still, it is a tenuous situation, one that cannot last forever, and sure enough, soon the stirrings of a new crusade emerges, led by a warrior who vows to purge Norse heresy from the lands.

But lucky for the Raven-Geats, they have Grimnir, their ancient guardian and secret weapon. For generations, their village has relied upon his protection, communicating with him through a Priestess of the Hooded One. With the death of the old priestess though, a new one has been chosen, a young woman named Dísa, who is understandably shocked when she sees the true face of their protector for the very first time. He’s a harsh teacher, but gradually, Grimnir hones his new student into a weapon as powerful as himself. Leading an army of warriors against the oncoming crusaders, Dísa will do anything to save the Raven-Geats and their sacred land.

While there are some themes in Twilight of the Gods that mirrored A Gathering of Ravens, on the whole they are very different books. However, one thing this sequel has in common with the previous volume is that I loved it just as much. War plays a big role in this one, resulting in darker, grimmer and more violent vibes, but the protagonists are once more stellar and truly shine. You can certainly read this as a standalone if you wish, but for a deeper understanding of Grimnir’s character, I would highly recommend starting at the beginning. He is the last of his kind, and no ordinary or traditional hero. Most of the time he isn’t even likeable. But even in his brutality and, for lack of a better term, his sheer “orcness”, there is humanity in him—the part that values honor, loyalty and duty to those he has sworn to protect. That said, you have to earn his respect. He is not gentle nor is he kind, and when you read about his style, you definitely think “tough love.” A Gathering of Ravens is a fantastic introduction to all this, especially when it comes to his relationship with Étaín, and you can also see some of it here in his relationship with Dísa.

And then of course, there’s the atmosphere. Author Scott Oden did a magnificent job bringing the setting to life in the first book, and the trend continues. This is a world of orcs, gods, magic and monsters, but the story itself is rooted in history, unfolding in a time of enormous cultural upheaval. The Norse clans are being threatened by the crusaders, as well as by weak leadership from within. Meanwhile, Dísa has to prove herself amidst the power struggle and rally the people. The tension is sharper and more present in this sequel, the story more action driven with plenty of conflict and breathtaking battle sequences.

The result is a delectable historical fantasy with an intriguing mix of adventure, mythology, and action which put me in mind of an old school sword and sorcery. And so, even though I really enjoyed A Gathering of Ravens, I actually think Twilight of the Gods may have surpassed it in some areas, in terms of pacing—which is faster and punchier, given the themes of war—and in the characters, because I really enjoyed reading about Dísa. Believe me, it’s hard to stand out when your costar is someone like Grimnir, but she managed to hold her own, and I loved her story arc and the growth of her character over time.

So bravo, Scott Oden! Clearly, his talents have only grown in the years since A Gathering of Ravens, because Twilight of the Gods flowed beautifully and never had to fight to keep my interest. It was a nice return to an unforgettable character, and I loved the way this sequel expanded his legend. Highly recommended, and I’m also beyond thrilled that this series has finally gotten audio editions. Paul Woodson is a skilled narrator who brings this epic tale to vivid life, and I’m glad I got to have this listening experience.

More on The BiblioSanctum:
A Gathering of Ravens (Book 1)

23 Comments on “Audiobook Review: Twilight of the Gods by Scott Oden”