Audiobook Review: Alone in the Wild by Kelley Armstrong 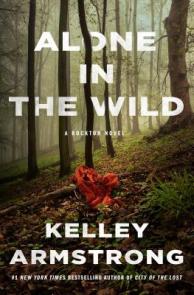 Alone in the Wild by Kelley Armstrong

Alone in the Wild once more reminded me why I love this series so much. Like the book blurb says, every season in Rockton seems to bring a new challenge, and this time, it’s a real humdinger. For who would have expected a baby to come out of nowhere into Casey Duncan’s life out in the middle of the Yukon wilderness, but that’s exactly what happens here. One moment, she and her boyfriend Eric Dalton are out in the woods enjoying their weekend camping trip, and the next, she’s tripping over a dead body of a woman in the snow, and hidden underneath the corpse is a crying infant no more than a few weeks old.

With the discovery of the baby comes a flood of questions, especially after an autopsy of the dead woman in the snow confirmed that she was murdered, and that she had never given birth. So who are the baby’s real parents then, and where are they now? What had the dead woman been doing out in the woods with a newborn infant that was not her own?

As the whole town chips in to take care of the baby, affectionally dubbed Abby, Casey and Dalton begin their investigation to find her true parents, beginning their search in the wild with the nomadic communities that lived outside Rockton. Being winter though, the people they seek might be on the move and difficult to track. Casey worries that they won’t ever find Abby’s parents, but at the same time, also dreads what might happen if they do. What if they turned out to be the members of the brutal hostile groups? Would Abby truly be better off with her real family if it meant being neglected and abused in that harsh and brutal life? Somehow, Casey doubted that, but then would she and Dalton—and Rockton—be up to raising a child if it came down to it? And of course, there’s the matter of the dead woman. Even in the midst of all the commotion, Casey’s not about to lose sight of the fact someone was murdered in cold blood, and the killer is still on the loose.

It’s nice to know Kelley Armstrong can still inject some newness into the series even after five books. Previous installments have more or less focused on things happening within Rockton, but in this one, the town and its people are mostly relegated to the background as Casey and Dalton take to wilds to find information. While life in Rockton is far from rigidly structured, there are still rules to follow and responsibilities to take care of. But on the outside? There’s none of that. Most of the people who live in the woods are there because they want to be away from civilization, or to be left alone for a variety of reasons. Among some groups, folk from Rockton are viewed with disdain or downright hostility. And it’s in this uncertain environment Casey must navigate to find the answers. It’s risky, it’s unpredictable, and it’s downright suspenseful. You can never be sure of what the outsiders will do, or what motivates them.

Back in town though, we do get some significant development in the relationship between Casey and her sister April, who has since made her home in Rockton following the events of Watcher in the Woods. I’m hoping this will be a long-term arrangement, because I love April and I think she’s one of the best and most interesting characters to be introduced to this series. The arrival of Abby also seems to have unlocked hidden sides to many of the townspeople, including Jen and Isabel. The surprise of a baby has certainly awakened a slew of conflicted emotions in Casey, who was told she is unable to have children. As for Dalton, Abby’s situation also brings to mind his own upbringing, which he doesn’t like to think about. His past has always been a sensitive subject in his and Casey’s relationship, but the current investigation is forcing them both confront the issue, among other difficult topics.

In a way, I think all of this contributes to Alone in the Wild being a more subdued and understated novel. Don’t get me wrong, the story is still very intense, but I think it lacks some of the urgency that was so prominent in the previous novels, where in many of the cases, the killer was hidden in town and could strike again at any moment. Here, on the other hand, the threat was understood to be on the outside and there was less pressure on Casey and Dalton to solve the murder. We got to go at a more relaxed pace, which wasn’t a bad thing, allowing for more character development and time to enjoy the beauty of the Yukon wilderness. The story read like a moody mystery, as opposed to a straight-out thriller, but personally I didn’t mind the change of pace.

All in all, Alone in the Wild was a great read, and Kelley Armstrong never ceases to amaze me in the way she comes up with fresh storylines for every book. I’ve mentioned this before, but you’d think in a place like Rockton, a tiny little settlement in the middle of nowhere with a limited number of characters and settings, the ideas would start to dry up real quick. But nope. We’re still going strong with book five, and I’m confident that even more great things are on the horizon. Here’s hoping we won’t have long to wait for the next adventure with Casey and Dalton.

Audiobook Comments: Therese Plummer always does an outstanding job narrating, and I always look forward to listening to the books in this series because of her wonderful performance. I know I’ve praised her many times before in past reviews, but I think it bears repeating: Therese is awesome. Highly recommend these Rockton books in audio.

More on The BiblioSanctum:
Review of City of the Lost (Book 1)
Review of A Darkness Absolute (Book 2)
Review of This Fallen Prey (Book 3)
Review of Watcher in the Woods (Book 4)

15 Comments on “Audiobook Review: Alone in the Wild by Kelley Armstrong”