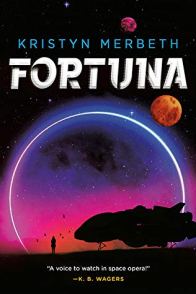 Kristyn Merbeth, AKA K.S. Merbeth, the author behind the rollicking Wastelanders novels Bite and Raid, takes her brand of riotous adventure and thrills to even greater heights in Fortuna. In this action-packed space opera about a dysfunctional family of smugglers, we journey with Scorpia Kaiser and her mother and siblings aboard their titular ship across a galaxy filled with conflict and chaos.

As the eldest daughter and the pilot of Fortuna, Scorpia is looking forward to inheriting the business and the ship from her mother one day. But a recent transmission has thrown a wrench into those plans. Three years ago, her older brother Corvus turned his back on the family, enlisting in a war to fight for his home planet of Titan. His decision broke Scorpia’s heart, and because of that she has never forgiven him for his betrayal. But now, Corvus’ tour of duty is over, and their mother has ordered the Fortuna to rendezvous with him while on their way to another job, which unexpectedly takes a calamitous turn right in the middle of the awkward reunion.

But what Corvus’ younger siblings don’t know is the truth of why he returned to Titan to fight in an unwinnable war. They have all changed a lot in the last three years, and his once beloved little sister Scorpia is clearly unhappy about his return. But with an entire planet dying around them, the Kaisers must now put aside their differences and work together in order to survive. Realizing how their mother had been used as a pawn in a conspiracy that reaches to the highest levels of interstellar politics, Scorpia and Corvus settle on a truce in order to protect what’s left of their family and prevent the galaxy from tearing itself apart from the inside out.

Told in the first-person, alternating between Scorpia and Corvus’ points of view, Fortuna is a non-stop thrill ride through a vividly imagined universe, where the planet on which you were born can mean as much as your family name, while those without a world to call home can be left vulnerable and without protection. Where you claim origin can affect your culture, your history, and how others perceive and treat you, and even among members of the same family, your birthplace can matter. Under such divisive conditions, it is no surprise that there is so much tension among the planets, leading to the development of deadly biological weapons including plants that can strangle the life out of an entire world. For a series opener, the world-building was simply superb, setting the stage for more adventures to be had in this most imaginative setting.

But the characterization was what made Fortuna stand out, and having it be a story about family was a brilliant move on Merbeth’s part. Anyone with a close sibling will probably find something familiar, heartwarming, or relatable in the characters’ interactions, because we understand how even though our brother or sister can get on our nerves, it’s simply impossible to imagine life without them. Corvus and Scorpia are complete opposites—him being serious and cool-headed, and her being impulsive and quick-tempered—but the two of them were close before his departure, which made the animosity between them upon his return all the more tragic. However, because of this impressively layered approach to their history, the ensuing steps to their reconciliation and eventual partnership were fascinating to watch.

Their voices, so different from each other, also complemented each other surprisingly well. Both of them have their issues, with Scorpia dealing with a drinking problem that often lands her in trouble and causes her to make all kinds of bad decisions, while Corvus has seen and done some things in the war which has left their mark on his soul. But when it’s time to take responsibility, the two of them admirably step up and show they have what it takes. Their contrasting personalities and problem-solving styles also meant a plotline that was always interesting and dynamic, and although dual narratives often make me wary, in this case there was never any confusion which character we were following. Better yet, once Scorpia and Corvus’ threads converged, the story got even better.

At the end of the day though, the plot’s trajectory and outcomes are pretty standard—but if you’ve come to Fortuna from the author’s Wastlanders books, you probably already know there’s absolutely nothing wrong with that. When it comes to delivering a boatload of sci-fi action and rip-roaring entertainment, Merbeth knows exactly what she’s doing, keeping the story’s momentum raging along like a pro. Even when you know what’s coming, you just can’t help but hold your breath and keep your fingers crossed, and that’s exactly the kind of intensity and electrifying experience I look for in my space opera. The only question now then, is when does the next book come out already?