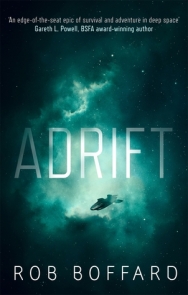 Rob Boffard knows his space disasters. A couple years ago, he wrote a guest post for the BiblioSanctum called “The Worst Things That Can Happen to You in Space” and before you ask, yes, he has included several of these in Adrift, a heart-pumping and thrilling sci-fi tale of survival.

It was a day like any other on Sigma Station, which boasts luxurious hotels and unique attractions, making it a popular destination for tourists heading into space. It’s Hannah’s first day on the job as a tour guide, shepherding groups of visitors onto chartered shuttles to get a better view of the stunning Horsehead Nebula nearby. Her next shift is aboard the Red Panda, to which she barely makes it on time, much to the chagrin of the pilot and their passengers, who are all unimpressed by the delay. Still, once they are on their way, Hannah is determined to make it up to them, not only because she wants to prove herself capable of the job, but also because she really can’t afford to be fired.

However, mere minutes into the tour, a horrific disaster strikes. Right before the eyes of everyone on the shuttle, Sigma Station is destroyed in a devastating explosion, killing every one of its thousands of occupants. The source of the attack, an unidentified ship that had recently passed through the station jump gate, now turns its sights on the passengers of the Red Panda, the only survivors of the massacre—and the only witnesses. Stranded in space, with no help to be found for lightyears in all directions, Hannah and her charges place their lives in the hands of their jaded but talented pilot, who manages to buy them some time to figure out what to do.

There’s something about the premise of Adrift that makes it immediately appealing, possibly because of its potential for all the tropes we’ve come to expect and love from disaster stories, and one need not go far beyond the cast to find examples. While the group aboard the Red Panda is rather eclectic, the passenger list is still filled with the familiar archetypes. Besides Hannah and the pilot, we have a husband and wife in a troubled marriage, their two young sons, a newlywed couple on their honeymoon, a matronly retired miner in her 60s, as well as brusque no-nonsense hotel reviewer named Jack. Of course, every story involving trapped characters must inevitably include a group hothead, a role which Jack fills nicely as the novel’s second major perspective. And who can forget the guileless yet precocious child, who is wise beyond his years? This role is filled by ten-year-old Corey, the younger of the two boys from the family aboard, rounding out our POV characters.

Once the adventure gets under way, however, we begin to see signs of Boffard’s efforts to make this story his own by filling the plot with interesting developments and clever surprises. Some of the characters are given backstories, sometimes presented in memory or flashback. Dark secrets and hidden motives come to light. Disagreements abound as there’s no clear leadership, though many of them try to take charge. Several of the revelations about the characters will make your jaw drop. Meanwhile, emotions are already running high as food and air supplies dwindle, not to mention a mysterious enemy still lurking out there, who has just annihilated a space station full of people and would have no qualms about murdering a few more. It’s the perfect recipe for a delicious thriller, and I’m happy to say, it was executed with well-timed action scenes and unexpected twists. All these conflicts and the overarching mystery made this book a compulsive and addictive read, and I’m only slightly annoyed that my favorite character died first.

With that said, I should probably wrap this up if I don’t want to give anything more about the story away. Needless to say, Adrift is packed with surprises, with the most significant ones occurring in the second half of the novel, and trust me, they’re worth finding out on your own. This is a book I would recommend to fans of sci-fi thrillers and space disaster stories, especially if enjoy a heavy survival component. It’s an exciting blend of intense action and high drama, supported by tightly plotted storytelling and a rich cast of characters. 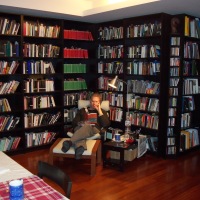