YA Weekend: Like Never and Always by Ann Aguirre 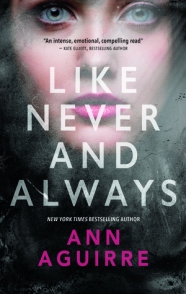 In the history of real mistaken identity cases, the one about the fatal accident involving two girls and one survivor is probably the most heartbreaking. Most of us have probably heard about the incident or seen the story or some variation resembling it in popular media, but in Ann Aguirre’s new YA thriller Like Never and Always, the scenario is given a disturbing and paranormal twist.

On a hot summer evening, best friends Liv and Morgan are passengers in a car along with their boyfriends, brothers Clay and Nathan Claymore, when an accident changes all their lives forever. Liv wakes up in the hospital, but the visitors by her bedside are not her parents or her boyfriend Nathan but instead Mr. Frost, Morgan’s father, and Clay, Morgan’s boyfriend. They and all the hospital staff are also calling Liv by her best friend’s name, which frightens and confuses her—especially when they break the news that Liv did not survive the crash.

Any hopes that this is just a horrible case of mistaken identity are dashed, however, when they remove Liv’s bandages and it is Morgan’s face starring back at her in the mirror. Not wanting to appear crazy or upset anyone further, Liv decides to go along with it in order to buy some time to figure out what’s going on, but becoming Morgan and stepping into her life is turning out to be more difficult than Liv realized. Her best friend, heiress to her father’s successful tech company, had lived in privilege and luxury, but her life had not been as well put together as anyone thought. Liv also discovers that, despite being popular and beautiful, Morgan Frost was a lonely girl with not a lot of close friends. And underneath that perfect and happy exterior, she was hiding all kinds of dangerous secrets, including an underaged affair with a married man. All of it was part of Morgan’s plan to uncover the truth behind her mother’s mysterious death ten years ago, and now it is up to Liv to finish what her best friend started.

I was of two minds regarding this novel. On the one hand, I loved the premise, as well as the mystery and suspense. On the other, this being a Young Adult novel, it also comes with a heavy dose of romance, as practically required by the genre. Normally, I wouldn’t mind so much, but when soppy romantic drama starts encroaching on my thrillers, that’s when I can get a little cranky. Aguirre had an amazing opportunity here to drum up some real tension behind an interesting conflict, and to be fair, she did a great job exploring the tumultuous relationships behind what I thought was a seriously messed up love triangle involving Liv and the Claymore brothers. But where the story faltered was the timing. I could never tell whether this novel wanted to be a thriller or a romance; the plot would be constantly swinging back and forth between these two genres, and more frustratingly, these shifts always seemed to come about at the worst times. It’s never wise to stop when you have momentum on your side, and yet, so many times it would be interrupted just when the mystery was heating up, and I would get brothers drama when all I wanted was for Liv to get back to investigating Morgan’s mom’s death.

Apart from those complaints though, this book was actually quite good. I enjoyed the premise, as well appreciated the story’s attempt to at least provide an explanation for Liv and Morgan’s body-switching, which in fact turned out to be rather touching. I would even praise this one as an emotionally charged tale of female friendship, which might sound weird at first, considering how one of them is dead, but everything Liv does is because of how much she loves Morgan. After literally living in her best friend’s shoes, Liv begins to understand Morgan as she never did when both girls were still alive and in their own bodies. The story also boldly delved into some difficult and delicate subjects, not shying away from them even when things got dark.

Had the plot stayed on this track a bit better, I might have enjoyed Like Never and Always a lot more. That said, it is by no means a bad book and I still had a great time, but too much mishandling of the romance and wonky pacing ended up dragging the experience down a little. I suppose I would still recommend it, especially if you don’t mind a hefty amount of romantic drama served with your thrills and chills.

25 Comments on “YA Weekend: Like Never and Always by Ann Aguirre”