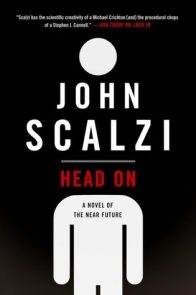 Head On by John Scalzi

Series: Book 2 of Lock In

I’m a huge fan of John Scalzi, having read almost all his novels, and when Lock In came out a few years ago it quickly became one of my favorite books by the author. It was therefore with great excitement that I picked up Head On, which is described as its standalone sequel. And indeed, you may choose to read this without having read the first book, but personally I feel you will be missing out on the subtler nuances of the series if you skipped right to this one. The world of Lock In and Head On is a very complex place and, as I will explain later in my review, reading both books will give you a fuller view of the picture.

Once more, readers follow Chris Shane, the series’ rookie FBI agent protagonist. Chris is also a Haden, the name given to those individuals whose minds are “locked in” as the result of a devastating flu that swept across the globe several decades ago. This disease killed many in the first stage of the infection, but a percentage went on to survive only to suffer acute meningitis, which affected the victim’s brain and caused them to become trapped in a state of being fully awake and aware but having no control over their voluntary nervous systems. A cure for this condition (dubbed Haden’s Syndrome after the then president’s wife who was the most famous person to be affected at the time) was given the highest priority, though none was ever found. Instead, scientists created humanoid personal transports called “Threeps” into which locked in individuals were able to link their minds remotely, allowing them to interact with their world even as their physical bodies remained immobile.

By the time this series takes place, personal transport technology has become much more developed and advanced. It has even permeated into the world of professional sports, in which Hadens pilot specialized Threeps in a fast and furious game known as Hilketa. Though the sport itself is extremely violent, involving the lopping off of heads with swords and war hammers, no one technically gets hurt because the only “bodies” getting battered and broken on the field are the robot-like Threeps. However, during a high-profile special exhibition game, an up-and-coming player named Duane Chapman suddenly dies in the middle of a match meant to attract new investors to the North American Hilketa League, his vitals disappearing off the boards for all to see. NAHL officials are quick to cover up the incident, leading Chris, who was present in the skybox during the fatal match, to suspect there’s more to Chapman’s death than meets the eye.

Like its predecessor, Head On reads like a sci-fi mystery thriller, following FBI agents Chris Shane and Leslie Vann as they sniff out clues and hunt down the perpetrators in Haden-related crimes. But unlike the previous installment, it dispenses with much of the social commentary and focus on topical themes, putting the emphasis on investigative procedures the actual crime solving. Happily, the culprit also wasn’t as obvious this time compared to Lock In. As a result, I felt that this sequel was more exciting in terms of pacing and levels of suspense, especially since the trail to find Duane Chapman’s murderer subsequently leads Chris to all kinds of strange personalities and bizarre happenings related to the dark underbelly of the Hilketa industry. Uncovering everything from backroom deals to sordid affairs, our protagonist winds up being caught up in series of harrowing events that include arson, assassination, and a whole pile of destroyed Threeps. Needless to say, this novel ended up being a very quick read, since all that intensity and action made it hard to put down.

That said, the book also lost much of its cerebral and philosophical bite due to the diminished exploration into social themes like disability, ethics in medicine, and other discussion-worthy subjects related to a world in which a significant percentage of the population suffer from an expensive and life-altering condition. While Head On lightly touches upon some of these issues, such as government funding for individuals with Haden Syndrome or the social perceptions of them in public, in this particular arena, Lock In still holds the edge. This isn’t really a dig at Head On, however; after all, you can only expound upon these themes beyond the first book to a certain extent before it starts becoming repetitive. As such, this is why I think it would be a good idea to read the two books in order; you’ll get the insightful commentary in the first one and the action and suspense in the second—the best of both worlds.

Head On, though, is still in every sense a Scalzi novel. It has his signature style all over it: in the clever premise, the slick sense of humor, the quippy lines of dialogue. It’s also interesting to note, while the author is careful not to reveal the gender of the series protagonist, in my mind I still picture Chris Shane as male because Scalzi can’t ever seem to write a convincing enough female POV (see examples Zoe’s Tale or The Sagan Diary). However, that’s just my personal opinion and ultimately a non-issue, since it didn’t distract or take away from my overall enjoyment of this particular novel, whose pages I devoured while loving every moment of the story.

In the end, I think I enjoyed this book just as much as Lock In, even though its tone may have shifted slightly more to a traditional mystery thriller narrative—which can be a good thing, depending on the type of reader you are. For me, Scalzi’s stories are always a delight because of how clever, witty, and approachable they are, and this one was no exception. I had a smashing good time with Head On, and whether you are new to the author or a long-time fan, I think you will too.

24 Comments on “Book Review: Head On by John Scalzi”